Improvised stunts and how to do them

This is a general guide and introduction for doing stunts in the Just Cause game series.

The main goal of this article is to introduce players to more types of stunts and provide basic guidelines to get you started. Stunts are a major part of gameplay in the Just Cause game series, so this article should be helpful in letting you enjoy these games to their full potential. Sometimes certain missions will even require the use of stunts to complete an objective. Other cases may be transportation, or just fun.

For the purpose of article organization, an "improvised" stunt refers to stunts that are designed purely out of player creativity and made from improvised stunting equipment found in freeroam, rather than ones designed by the developers and featured in a mission.

Quote from the Just Cause (1) PC version manual:

The disturbing new craze of "vehicle surfing" came to light in the capital last week when two youths were seriously injured after accidents. Security officials were quick to get involved and General Mendoza has given his security staff powers to shoot on sight anyone involved in the participation of this reckless craze.

It is thought that groups of young people have been performing a number of mad stunts all involving vehicles including:

From the stunt position:

During missions and free roaming you will have to do stunts that are both for fun and, in the worse case, to keep you alive near the enemy.

"Aircraft stunt" refers to performing a stunt whilst using an aircraft (not including the parachute). These stunts can range from stunt jumping onto an airborne aircraft or performing a ridiculous plane-to-plane stunt jumps. These stunts are far more dangerous than most other kinds of stunts and with other stunts they may take time to perfect and perform safely.

The rest of the page sorts tips and examples by game. There is no definitive number of different stunts, so this article is only meant to introduce players to game features and give examples.

Just Cause has stunts for beginners, comparing to those done in Just Cause 2, but some can seem sophisticated if done correctly.

The aircraft stunts in Just Cause are mostly the basic and easiest to perform within this stunt category. A simple example of a stunt can be performing a loop-de-loop in a plane or the extreme stunts can include catching up to a helicopter after bailing out and flying it again in a controlled fashion.

The Storyline missions in Just Cause are definitely adventures, but most of them do not require the use of complex stunts.

The broken version of the Vanderbildt Route 66 can be used as a stunt-ramp. Seen here in Esperito City - South.

Shimizu Tumbleweed in Esperito City, with Rico in the stunt position.

Note the instructions on screen.

JC2 has all the older stunt position uses, but now some vehicles (like the MVs) have up to 3 stunt positions. Rico can quickly move from one position to another while the vehicle is in motion.

In JC2, you can access the other positions by stunt-jumping to the vehicle and using the movement keys / right stick to climb onto them. Once you are on the front, you can climb onto the right and left sides of the bumper, as well as make Rico hang down from the middle position, causing his body to hang just centimeters above the ground. All ground vehicles (except Motorcycles) have only the front stunt positions, with the exception of the MV V880, which also has back stunt positions. That means you can climb around the front and back of the vehicle, as well as stand on the roof. If you hang down from the middle back position of the V880, Rico will drag on the ground and slowly lose health. He will also lose health if he is clinging to the side of any vehicle's bumper as it is being scraped across a wall.

Just Cause 2 has more options for aircraft stunts to be performed. With the newly upgraded grappling hook, the stunts can now be bigger in terms of options as how to perform them. Doing a Bridge Limbo will only be counted as long as a plane is used (See Bridge Limbo). Aircraft stunts are now more different as the stunt jump for helicopters involves hanging from underneath the cockpit and stunt jumps for planes are now just near the cockpit. Stunts that can be performed in JC1 are different in difficulty as each plane has it's own specific performance rating e.g. a Peek Airhawk 225 can perform a loop much easier than a G9 Eclipse.

Aircraft stunts involving the grappling hook can be simplified down to grappling an object to an aircraft. Mostly this is used in the way of grappling a helicopter to a Baby Panay Statue and pulling the statue down. Other forms and methods of this can be a helicopter being grappled to a car or something smaller than the helicopter and using it as a wrecking ball. The H-62 Quapaw is a great helicopter to grapple moveable objects to as the Quapaw has a heavy structure and a powerful engine to keep itself in mid-air.

This is what you can do with the rare white Gas Tanks in Just Cause 2. Click on the image to see an animation of a stunt. This file is an animation.

One of the other positions in Just Cause 2.

Getting up on a helicopter. This can be done to kill the occupants and leave, or to just hang from there and shoot, or to Hijack the helicopter.

In Just Cause 3, the new Grappler (using Gear Mods) can have up to 6 cables, which can be made to pull things together. This allow much more complex stunts. The addition of the Wingsuit also allows stunts to become more complex.

Just Cause 3 no longer has a set "stunt position" and the player can freely walk around on top of a vehicle. Rarely it's possible to see Animals on top of Civilian cars. They're trying to run off, but the only ways to leave are to Grapple, or jump off. Rico will also fall off, if a plane does a barrel roll (as seen during the mission Welcome Home).

The only vehicles that don't have stunt positions are motorcycles, The Rocket, and the Mugello Farina Duo. Grappling to these will cause you to automatically enter the vehicle.

Most missions in JC3 are quite unrestricted and leave the player relatively free to complete the mission tasks in any random way. This means that missions don't necessarily require complex stunts, but utilizing the upgraded Grappler to its full potential would certainly make missions much easier and more entertaining.

Just Cause 4 is perhaps currently the game in the series with the most possibilities for stunts, for many reasons. The game adds much more functionality to the Grappler. This new functionality (airlifters and boosters, which can be further customized in grappler loadouts) is sure to greatly improve the complexity of possible stunts. Additionally, Just Cause uses the new Apex engine, which allows the game to have a number of new and improved features, like improved physics, weather systems and such.

Likely every single one of these stunts can be found on YouTube or in the Stunt Squad competitions (see below).

The "stunt position" of vehicles seems to work the same way as it does in JC3. The only difference is that you move depending on what speed the vehicle is going. If it's still, you can move at any speed. If it's has speed, Rico will go slower and slower depending on the speed. Also if the vehicle is big enough (EM-979 Airliner, Spearhead Transport, Emsavion Airship) anywhere you grapple, you will go there and hang off it, so if you grappled to the vertical fin of a EM-979 Airliner, you'll actually grapple there and hang. Grapple to the walls inside of the SkyCastle Cargo Jet's cargo bay wall, you'll hang there.

Rico can also hang under a helicopter by holding E and then pressing S (on PC).

Just Cause 4 also has "stunts" as a type of activity that can be done as a part of settlement completion. See Stunts and challenges in JC4 about those.

The players who make and record the best improvised stunts can get awards for them. This benefits the developers by advertising the game.

See the Square Enix promotional page for more info about this.

Some of the Stunt Squad rewards.

Setting boosters to a vehicle.

Moments later, Rico is in the stunt position of the same vehicle while its hanging from airlifters and propelled by boosters.

As seen in the "tornado gameplay reveal" trailer.

Parachuting from a burning jet ski over a waterfall in the "Eye of the storm" trailer.

Emsavion Airship are slow. Strapping missiles onto them makes them much faster.

Flying a Stealth Microfighter into a flying SkyCastle Cargo Jet by folding wings.

Using Airlifter mods and Booster mods to fly a car.

Squeezing the PA Microfighter through the tiny hole inside one of the pillars of a bridge.

Anyone is welcome to post their stunt videos here. 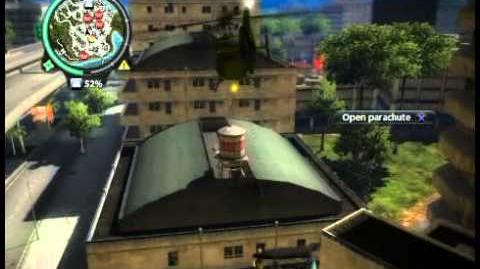 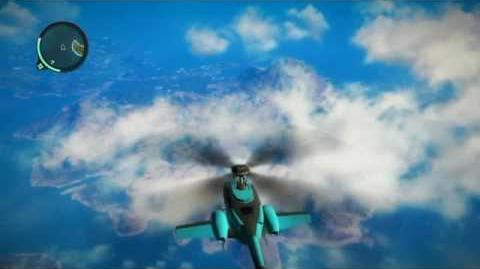 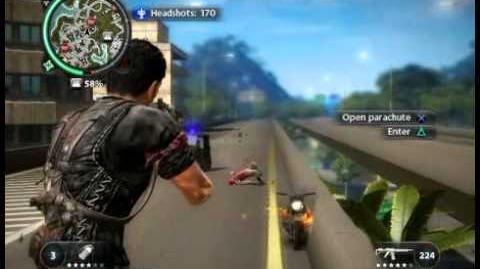 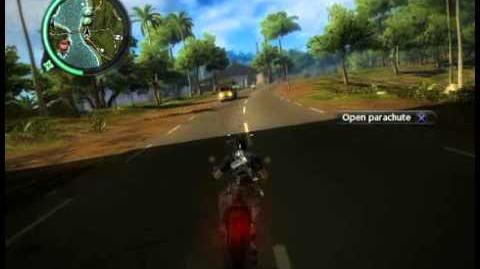 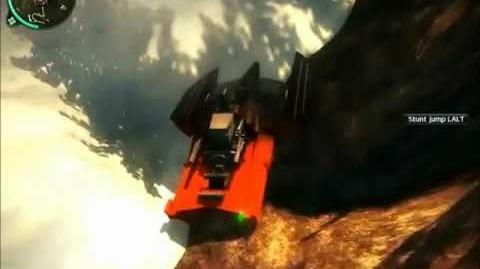 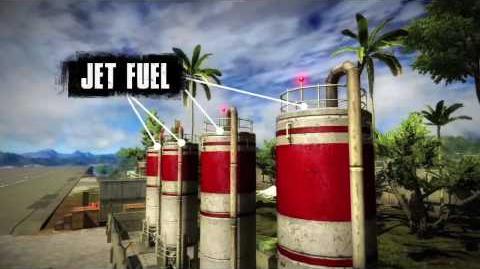 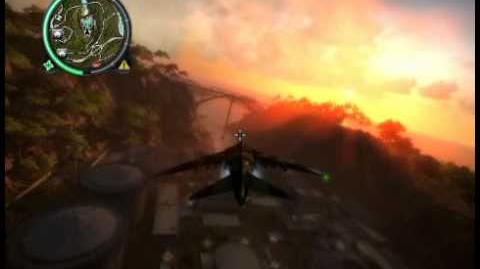 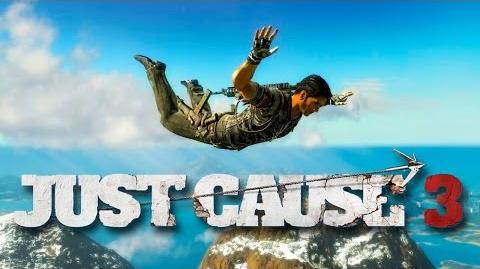 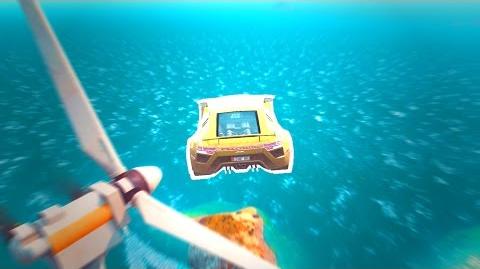 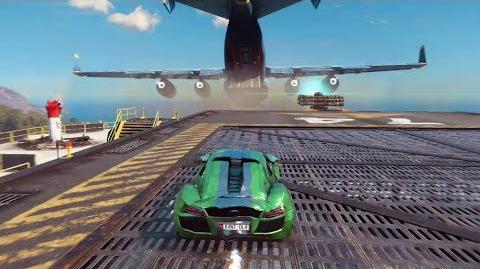 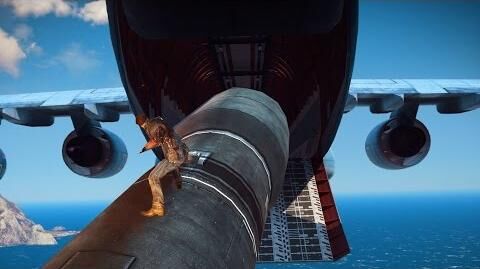 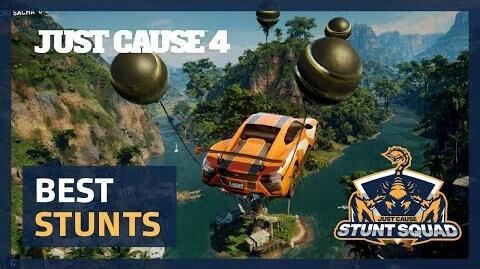 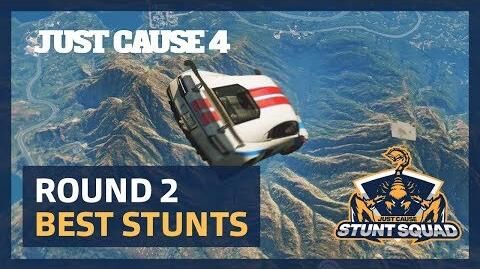 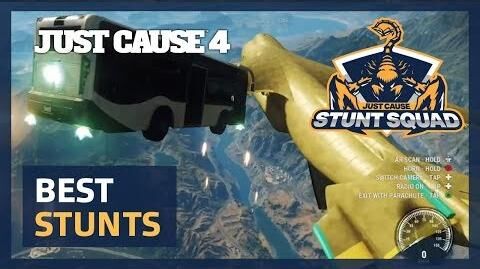 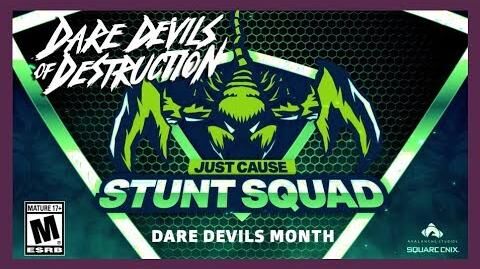 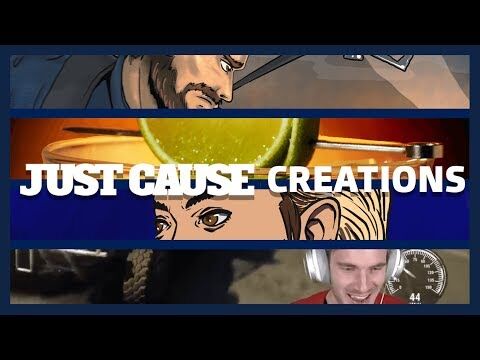 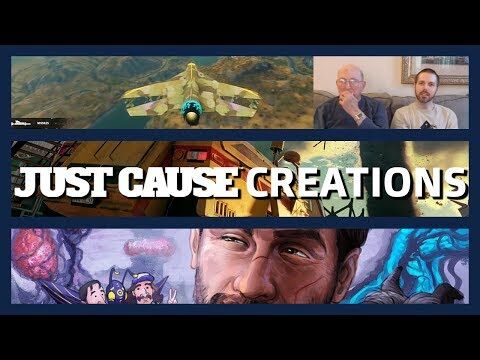 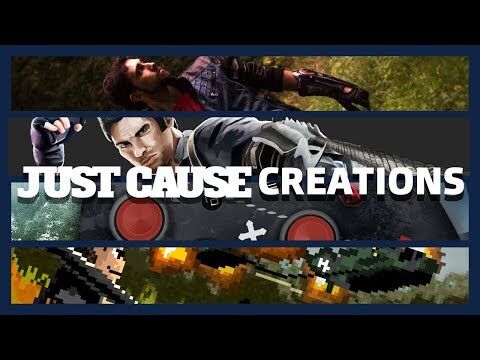 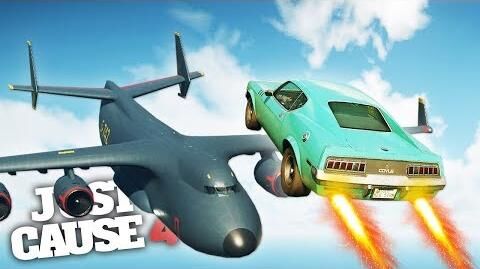 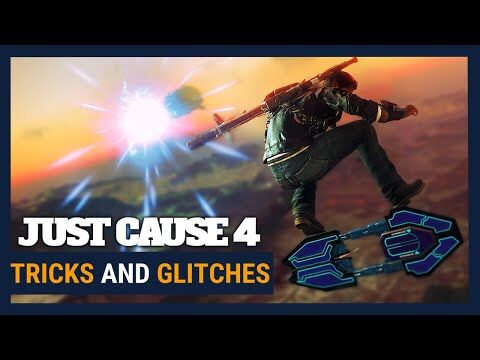