Kampung Cahaya Bulan is a village in in Just Cause 2.

The village has one Propaganda Trailer in the middle of it and a fairly well hidden Transformer near the center of the village, opposite to the street from the propaganda trailer.

The settlement is rather an ancient town than a village, even if it's not defined as a city. To the west, there's several buildings clustered together which look like a fortress. There's a square in the middle, with a marketplace and small monuments, and just west of the fortress-like buildings there's another smaller square next to the cliff.

The settlement is easily reached by a short dirt road connecting from the nearby paved mountain road.

In the geographical territory of the Berawan Besar Mountains, but in the influental area of East Tanah Raya, in a large snowy valley in the south-western part of the mountains, at an altitude of 715 meters above sea level. 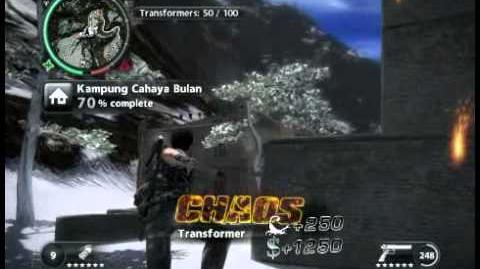 Retrieved from "https://justcause.fandom.com/wiki/Kampung_Cahaya_Bulan?oldid=170860"
Community content is available under CC-BY-SA unless otherwise noted.