Kampung Pantai Kelabu is a village in Just Cause 2.

The village is of medium size. It consists of a lot of simple cabins and shacks on both sides of a river current in the Sawah River delta. A road crosses the river over a wooden bridge. Several of the shacks are so close to the river that they could be used as docks, but there are no boats.

The outpost for Pulau Ombak Ribut military base is located just outside the settlement on the northern side.

The M2 Bridge is located just south of the settlement.

In the Sawah River delta, south of Pulau Ombak Ribut.

The village also has some Small Destructibles, but these do not count to settlement completion. They provide Chaos points and contribute to game completion.

As seen in the video below, a Motorcycle spawns at one of the huts but disappears again later. This spot could probably spawn a random civilian vehicle. Many villages spawn random small civilian vehicles like that. 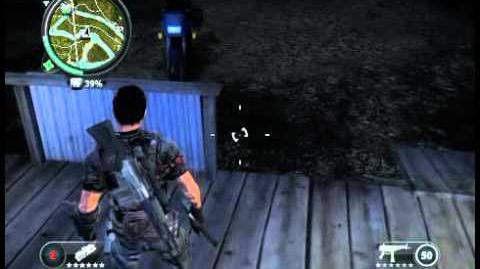 Retrieved from "https://justcause.fandom.com/wiki/Kampung_Pantai_Kelabu?oldid=155927"
Community content is available under CC-BY-SA unless otherwise noted.