Kem Gunung Dataran Tinggi is a military base in Just Cause 2.

The base is divided into several parts and outposts, with cable cars going between some of the outposts. You can see and use those during the opening mission, but strangely some of the cable cars are gone when you return there after the mission.

Some of the buildings don't look like the usual military base buildings, like the hangars and the concrete buildings with 2 floors. These are 40-50 meters high and have doors, leading to the roof. These buildings are made of concrete too that is common with the other buildings. The base is one of the most important radar and communications bases in Panau.

There's no road to the base due to its location, so the only way or method of entering this base would be by aerial means.

The name translates to "Highland Mountain Base" in Indonesian and Malaysian.

This is one of the few bases that has a Flak Cannon. In this case, there are two of the four barrel versions here.

Close to the peak of Gunung Dataran Tinggi in the Berawan Besar Mountains.

The base is a very good place to for BASE jumping. Grapple to the top of the high concrete buildings and jump from there. Make sure you don't land on the helicopter pad. There's a 700 meter tall vertical cliff, below the base.

It is possible to complete this location during the mission, but only if you do it before you get to the top (last) level of the base. If you leave that small area after entering, the mission becomes stuck, because Kane will never fly down to extract you. Something you can do, however, is when Kane locates the 2nd memory card, after you pick up the pistol, you can go back to 2 fuel depots that you pass, and destroy those. Otherwise, you can destroy most of the destructibles in this base with the conveniently nearby Flak Cannon (when you pick up the 2nd memory card). Some of them require precision to hit though.

There are also two SAMs here during the featured mission that are supposed to be destroyed, but these don't even contribute to the overall completion.

The mission "Welcome to Panau"

The base is the first discovered location in the game, in the opening Agency mission Welcome to Panau. Rico must find his lost PDA memory cards, as they are spread out all over the base. It's possible to complete the base to 100%, during this mission, but only if the destruction is done before the part where you have to hold your ground, because if you leave the designated spot, the agency helicopter will never come to collect you.

Skydiving in the nearby area. The base can be seen on the mountain.

During the mission Welcome to Panau.

One of the cable car stations are seen to the left.

Note the cable cars near the right edge of the picture.

The ramp to the "plaza".

A Radar Dome exploding at the base.
Add a photo to this gallery 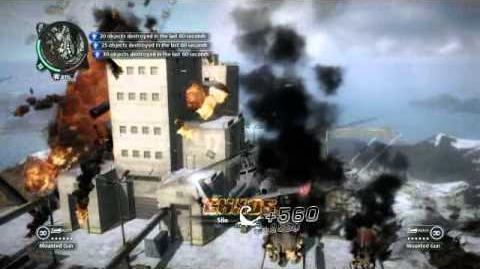 Retrieved from "https://justcause.fandom.com/wiki/Kem_Gunung_Dataran_Tinggi?oldid=162176"
Community content is available under CC-BY-SA unless otherwise noted.