Kem Gunung Raya is a military base in Just Cause 2.

This military base is a medium-sized location on top of a mountain. The name translates to "Camp Great Mountain" in Malay and Indonesian, which refers to it being on said mountain.

Other than the usual sabotage destructible objects, this base has 4 special SAMs, which do not count to the completion of the base. They will shoot down any enemy aircraft after the mission "Clear Skies", which takes place here. This makes the base a good place to hide at, if the player is being pursued by a Helicopter.

According to his PDA entry, Colonel Ismaryanto allows no recreation in his base and all forms of leisure are considered to be bad for morale. Men caught playing cards, smoking cigarettes or talking about things other than the tasks at hand are summarily flogged. As such, Ismaryanto is probably a ruthless commander. However, as with every other colonel, this is not exactly shown in-game, as he just attacks you if you get too close.

In the middle of the Berawan Besar Mountains. It's in the Reapers territory, north of the Bandar Gunung Raya village. The base is located directly below the top of Snow Peak (Gunung Raya).

Main article: Just Cause 2 Bugs and glitches#Soldiers at bases spawn inside a concrete building. 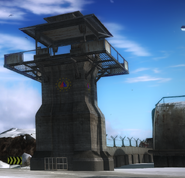 One of the Guard Towers of this base.

The base from the north.

The bunkers in the base.

The Communications Outpost on the base.

One of the base Radars.
Add a photo to this gallery

Retrieved from "https://justcause.fandom.com/wiki/Kem_Gunung_Raya?oldid=162085"
Community content is available under CC-BY-SA unless otherwise noted.