Lengkok Sungai Gambler's Den is a settlement, casino and a notable building in Just Cause 2.

It's a set of unique wooden buildings, used as a gambling destination in the Lautan Lama Desert. It might be an underground alternative to the Panau Falls Casino and it's assumed that many ordinary desert citizens go there to gamble and drink. It's run by an armed group.

The structure of the building is mostly over the tail-end of an arm of the Rajang River. It's accessible by taking a boat to a dock that is on the beach next to the structure. Stairs can be taken to enter the platform, and the visitor is free to visit the many gambling rooms or assumed bars in the area. There are four watch towers, three of which had guards in agency mission White tiger. Here were also two guards at the base of it. Almost in the middle there's a dead tree. At least 2 Health Cabinets are found here, due to the den being an important mission location. The red lanterns can be destroyed by gunfire, but they'll respawn later.

Because the boat that is at a dock near the den has the red icon over it, it is assumed it belongs to the gambling group. Therefore, citizens who wished to visit the den would be taken by the group there in the boat. Next to the den, there is a small supply room, which probably has motorcycles in it, since there were two in the "White Tiger" agency mission. It is assumed that the gambling group would also use the motorcycles to transport customers, also. There is a path that can be taken from the Gambler's den to the beach ship, as well.

There's an upside down traffic cone floating in the small river arm that leads to this place.

The informant, in the mission The White Tiger (which features this location), calls this facility an "old gambling warehouse".

As many other obvious non-villages, it's marked as a village on the Map. The game could have used about 5 more different settlement icons.

The people who operate this casinoEdit

During the mission that takes place here, there are three snipers at elevated positions and armed gangsters on the ground. The facility does not get abandoned after the mission, but there will only be civilians here.

East of Bandar Lengkok Sungai in the Lautan Lama Desert. It's next to a small pocket in the Rajang river. The settlement is relatively well hidden by being located in a valley that's densely full of trees. 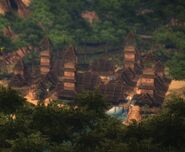 A random person at the settlement. It's not known if this person is a member of the Gambling Group.

A traffic cone, similar to the one in the water.

Retrieved from "https://justcause.fandom.com/wiki/Lengkok_Sungai_Gambler%27s_Den?oldid=160624"
Community content is available under CC-BY-SA unless otherwise noted.