Thunder and lightning storms are a type of extreme weather featured in the Just Cause game series.

Everything changed as of Just Cause 4 where the player can experience extreme weather where turbulence affects aircraft and visibility.

Lightning storms cause darkness and heavy rain, similar to night time and lightning becomes common. Lightning strikes targets of all types, including Rico, civilians, Army of Chaos rebels, Black Hand soldiers, Vehicles, animals and more. Lightning is very powerful and can take out heavily armored targets with only one or two strikes. Although lightning strikes pose a large threat to Rico, it can help the player in combat by quickly taking out enemy units. Before striking, the target will have sparks crackling on them, indicating that lightning is about to strike. Moving fast and staying low can avoid lightning, as it lightning tends to hit targets slower and higher in altitude. There are three known distinct types of lightning: white strikes, blue strikes and extra-powerful blue strikes. These are not official names, but just names to classify the lightning strikes.

White lightning bolts are by far the most common. They are powerful enough to kill almost all infantry in one strike, except for Rico and Titans. If Rico is hit by white lightning, he will be badly damaged. However, white lightning strikes deal only slight damage to vehicles.

Almost any vehicles hit by blue lightning will instantly be destroyed by one strike. Getting struck while wingsuiting, or parachuting in a lighting storm can severely injure Rico. A lightning strike is powerful enough to almost one-shot-kill even the toughest vehicles in the game, including the Warchief Assault Tank, Conquistador Warship, SkyCastle Cargo Jet, and even the Spearhead Transport, resulting in the vehicle blowing up upon any more damage. A point-blank, direct hit from lightning can critically damage Rico, sometimes even killing him if he's taken the slightest amount of damage even if he is covered by any destructible protection (such as vehicles).

Powerful blue lightning bolts are very rare, extremely powerful lightning strikes. They can take out any destructible object in the game in one shot, including the Warchief Assault Tank, Conquistador Warship, SkyCastle Cargo Jet, and even the Spearhead Transport, plus the enormous variant of the Satellite Dish- a massive chaos object worth 10,000 chaos points upon destruction. Rico, Titans, Colonels and all infantry are instantly killed by this type of lightning should the lightning bolt connect. This makes this particular type of lightning the source of the highest amount of damage possibly dealt in Just Cause 4, which is to say its damage output is the highest of all weapons and explosions in the game.

An extra-powerful lightning strike appears as a bright blue streak of electricity. Upon impact with its target, it would make a large electrical explosion of mostly blue (about 80%) streaks, lines, sparks and electricity mixed with whitish (about 20%) colors. The explosion is enormous, around the size of a Sphere Tank's explosion but with much more damage. Anything struck by it would cease to exist completely without any remains of the destroyed target- including vehicles, chaos objects, infantry, guns and ammo and basically anything destructible-, unless the target is too big to disappear behind the explosion. In that case, it would be destroyed as it usually does.

This extra-powerful type of lightning makes a massive, charred flaming crater in the ground. However, the crater is virtual, as it does not seem to exist in 3-D. This means Rico can walk on it like it doesn't exist.

The storm can spawn in the rain forest biome, but Rico can manually activate a storm on purpose upon capturing Meteolab and Zona Dos, or if you fire a storm grenade with the DA 9.3 Lightning Gun.

One of the earliest artworks from the announcement of Just Cause 4. 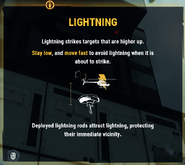 Control the lightning storm after Operation Thunderbarge. See more tips at Just Cause 4 General gameplay tips.
Add a photo to this gallery
Retrieved from "https://justcause.fandom.com/wiki/Lightning_storm?oldid=160651"
Community content is available under CC-BY-SA unless otherwise noted.