Luchianov a.k.a. Looch is a character in Just Cause 3.

He's the only overweight person in Medici. He might also be the only one to own a leather jacket.

In the Bavarium Sea Heist it is revealed that he's Russian and that his actual name is Luchianov. Tom Sheldon calls him a "former commie" and his friend.

He owns and drives a '69 Stria Sussurro moped.

He's qualified to convert a speedboat into a weaponized attack boat (Loochador), installing the weapons himself. He also said to have improved the boat's performance.

In the mission Conflicting Interests, Dimah arranges him to meet Rico at a small dock south of Vigilator Nord where he carries a box of unknown items off his Pescespada SS speedboat; but it's unknown if this is a part of his job. The box is marked as fragile content and to keep upright at all time. Dimah is his friend and he was doing a favor by helping Rico.

Dimah seems to think that Looch has inside info on the Vigilator Nord military base, but he just says that finding the Bavarium scanner is like finding "one hell of a needle in one hell of a haystack", which doesn't really contribute anything useful.

Looch returns in the Bavarium Sea Heist DLC where it's revealed that he used to work for Di Ravello at the same facility as Dimah. They became friends and escaped together.

In the mission The Setup he customizes a stolen Black Hand speedboat by installing weapons and improving its agility. He proposes to call the boat the "Rocket Boat" (in reference to the boat's armament), but it's ultimately named "Loochador" by Rico. The boats name refers to both Mr Luchianov's nick name and Mexican wrestlers.

Looch on a '69 Stria Sussurro.

Looch talks about Dimah some more.

Concept art of the cut Mafia faction. One resembles him, so he is believed to have originally been a part of that faction.

Looch on the boat. Note that this is a Polish version of Bavarium Sea Heist. 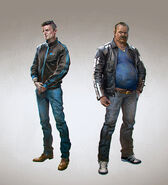 Looch NPC
Add a photo to this gallery