Los Demonios is the second downloadable content for Just Cause 4.

This was changed a little in a later announcement: "In Los Demonios, an ancient demonic force has invaded Solís, with only Rico and an all-new demon killing crossbow up to the challenge of stopping them."

Longer description was released as the expansion pass description on the official Square Enix store: "Whilst Rico & Javi investigate a newly discovered temple off the shore of Solis, an archaeologist working with the Black Hand unexpectedly releases an ancient demonic force from its imprisonment. A parasitic infestation now spreads across the island, terrorizing its inhabitants and attacking any Black Hand forces that stand in its way. Rico must now tackle a new type of threat and seek out answers to send the demons back from whence they came before it’s too late!"

This DLC was originally announced with the other expansions before Just Cause 4 was launched, but it was specifically announced along with the large May 21st, 2019 patch. The announcement released the first trailer and updated the above short description.

Javi Huerta gets Rico to check out Isla De Los Annilos, that has a "necropolis" that was constructed by the Qacha people and discovered several years ago. Strangely, all the sarcophagi found there were empty and its real purpose is unknown.

Another archaeologist Simón Valencia has tricked them into triggering some ancient machinery. Simón then ambushes them and expecting to find gold, he triggers the final part that releases some ancient plant and insect monsters. These monsters quickly contaminate the surrounding atmosphere and fight the humans away.

Javi finds that the Qacha people had constructed the "necropolis" machine to lock away the "demons", after they had defeated them.

This "demon infestation" soon spreads to the mainland and takes over 7 settlements. Rico has to stop these before he can return to the main infestation at the island.

For further details see the mission articles, starting with The Artifact.

The DLC is named after the demons - cow-size flying insects. They were called "demons" by the Qacha people.

The actual origin of the monsters remains a mystery, but Javi vaguely speculates that they're just very ancient. 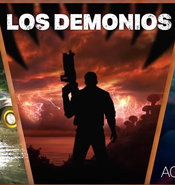 Earliest announcement picture of this DLC.

Later logo from the announcement trailer.

Same, but with out text.

The main enemies are these giant insects, the demons.

Weird glowing tree-like things are among the destructables.

Isla De Los Annilos map, as seen during a mission cut-scene. It's in the north-east corner of Solís. A part of mainland is visible in the corner. 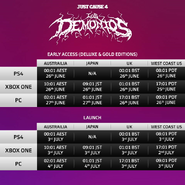 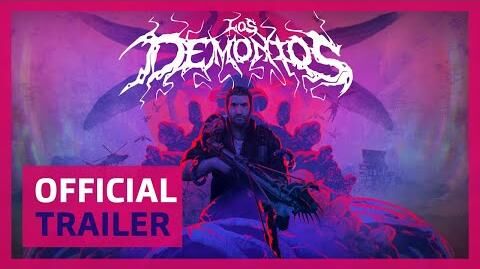 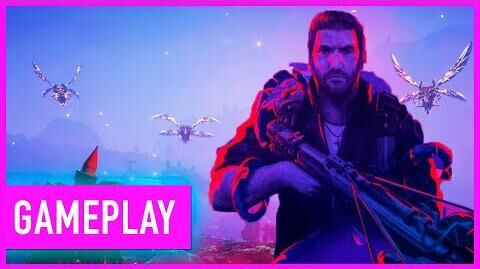 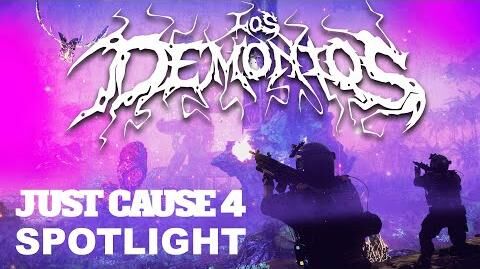 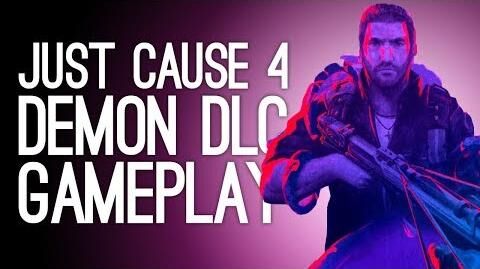