The MV is a large military off-road car in Just Cause. The guerrilla PDA page calls it an "EMVEE Armadillo".

For any other MVs, see MV (disambiguation).

In normal gameplay, the vehicle is called simply "MV", but the guerrilla PDA page calls it an "EMVEE Armadillo". This is a reference to how the HMMWV, that it's based on also has an abbreviation-name that is commonly spoken as "Humvee" for ease of pronunciation.

In Just Cause 2, the name "MV" became the designator for several more HMMWV-based military vehicles.

In Just Cause 4 it was revealed that the name "Armadillo" is, in fact, the name of the company that produced the iconic MV.

It is obviously based on the HMMWV. Unlike the HMMWV, which is available in many versions, the MV's rear end is only available as the "pickup" version. It's distinguished from the HMMWV mostly by its large mud guards / fenders and its large bumpers. It looks like it might be lightly armored, but it's not really bullet-proof.

It is quite good off-road, but it is not fast enough to be recommended for those sidemissions where you have to catch a sports car. It gains higher speed than most cars when driving down steep hills, possibly due to the heavyweight class of the vehicle.

The Agency variant is completely bulletproof, like a Ballard series armored vehicles, but is unobtainable on PC.

How to drive the Agency MV on PCEdit

This guide shows PC players how to remove Tom Sheldon from the car, to allow the player to drive it. It's not possible (or just not known how to) bring the vehicle out of the mission and into freeroam.

This is the most common variant.

The interior of a Military version.

A weaponless Military version found in a Guerrilla sidemission.
Add a photo to this gallery

With the mounted gun facing backwards. This variant appears only once in the mission Streets of Fire. Note the black and grey camouflage design as it can be seen well in this picture.

Near two Huerta SPA Ocelots.
Add a photo to this gallery

In the mission Dismissed Without Honors.

The same version except this time in a sidemission. Also, how are they out in the middle of a jungle?
Add a photo to this gallery

While at this time we don't know if the Agency MV is possible to save on PC, it is certainly possible to drive it.

The vehicle in the background is a Wallys GP.

The van is a Cutler Bullhorn.

Agency version, seen in the mission Devil's Drop Zone at its parking spot.

Slightly damaged.
Add a photo to this gallery

A rare unmarked version with a Mounted Gun pointing forward.

Unmarked and armed version in the mission The San Esperito Connection but with the Mounted Gun pointing backward.

Close-up of the Mounted Gun.

Underside view.
Add a photo to this gallery

Montano Cartel variant in a sidemission. A better quality is needed.

A Guerrilla Wallys GP seen on roads in Guerrilla and unstable provinces is on the left and on the right is an MV provided at Guerrilla safehouses, together side by side. 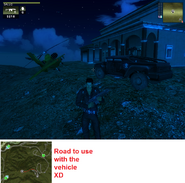 An unmarked one is inside the shed.

An unmarked version is in the foreground. The vehicle pictured is a Scando 700 Sedan.

The HMMWV (or Humvee), the vehicle which this vehicle is based off of.

An unmarked one in an unmarked military base near the field that's destroyed in Field of Dreams.
Add a photo to this gallery
Retrieved from "https://justcause.fandom.com/wiki/MV?oldid=162159"
Community content is available under CC-BY-SA unless otherwise noted.