The MV V880 is a military off-road vehicle in Just Cause 2.

It's one of the 3 very similar vehicles, based on the military HMMWV (High Mobility Multipurpose Wheeled Vehicle) - "Humvee" to civilians.

Of all these three, this vehicle is the most closely related to the original armoured looking MV, used by the San Esperito Military.

It can spawn in desert, snow and jungle camouflage. In 'Hell on Wheels' it spawns in Reapers red, another red variant is provided for the 'Ketam Besar Trespass' race challenge.

This is one of a few four-door vehicles in the game.

Moderate speed and a small turning radius, excellent handling on rough terrain. It's V8 twin turbo allows it to be the fastest car in the desert. They're excellent escape vehicles since they handle well and can be found in several Military bases in Panau.

Despite its military nature, is not armored at all. The lack of armor is a major problem, shared with the HMMWV. It can take even fewer shots than most civilian cars. Care must be taken to keep the vehicle from catching fire during chases, especially when being fired upon by a Mounted Gun or an Assault Rifle.

The red light on the roof is usually the first part of the car to be visually damaged, falling off. 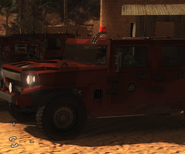 Reapers MV V880 in the mission Hell on Wheels.

The one provided for a race.

A Ular Boys elite driving one while the military tries to kill him and Rico.

Three form a roadblock in I Want to Break Free.

One with its occupants dead at Negeri Tenggara.

One at Kampung Bahari in an attempt to kill Rico. It's the one near the Maddox FVA 45.

One at the Roaches HQ in an attempt to kill Rico. It's partially obscured by the Wilforce Trekstar and Shimuzu PI Service.

One of these in Casino Bust being flipped into the air by Rico. This can be done by attaching a grappler tether to a faraway distance then grappling it to the MV V880.

Panau viewed from above (not very clearly) with Rico "driving" one of these.

At far right. The vehicle at center is a SV-1003 Raider and at the far left is a Wilforce Range X. Screenshot taken at Awan Cendawan Power Plant right after Power Surge.

The ones in Hell on Wheels. These three vehicles cannot be seen again in the base game without modding.

An MV V880 at Pekan Ayer Gilang. Do note the graphical enhancements, such as the street and Panauan Military's appearance. Also, the weather is tinted to look realistic.

An MV V880 as seen in Kampung Penggali.

Add a photo to this gallery
Retrieved from "https://justcause.fandom.com/wiki/MV_V880?oldid=160575"
Community content is available under CC-BY-SA unless otherwise noted.