Manaea is a town in Just Cause 3.

Manaea is a pretty large cliffside town located on the eastern coast of Baia. It has a main bridge (which is indestructible) which heads onto to main loop of the town. Below the hill and on a small stretch of flat ground, there is a smaller, newer section of the town. At the very point of the cliff side town is the police station.

According to the in-game map: "Manaea was the original capital of Medici, back when the island's name was first formally established by Roman-Hunnic occupants following the Barbarian Invasions of the fifth century. This cliffside gem sports some of Medici's best views; its downtown area, which winds through a bustling residential apartment district, was recently renovated and offers plenty of places to kick back and relax."

Speculative estimates suggest that Manaea's population is approximately 3500 with 2500 living in the old town.

The town is split into two sections.

The old section sits on top of a big hill. The old section has 3 plazas. The first is located around the Di Ravello statue and includes a "Le Fortia" shop, supermarket, "Super Meracato" store, unnamed bakery, the flag and sometimes a group of musicians. It will usually be guarded by 3 - 7 rebels if conquered. The second plaza is located down a staircase overlooking a cliff on the main road. It includes a bakery, meat shop, supermarket and 2 liquor stores. The third plaza is located at the end of the old town. It includes a "Caffe Magic", supermarket, tobacco store, church, fountain, police station and a big amount of apartments. It will be guarded by 7 - 12 rebels.

The new section is to the side of the hill. It consists of a few modern apartment buildings. It is smaller than the old section and strangely less busy. There are no commercial or office buildings here. The new section is near the coast, and has a small beach.

In short, this settlement is a town near the coastline of Baia and has a Lighthouse plus sunbathing tourists at the beach.

A Di Ravello tape can be found here.

This is one of the easiest towns to liberate, likely because it is the first town the player liberates. In-universe, this is strange since it is pretty large for a town (by Medici's standards).

After completion. Notice that the flag at the police station has not loaded because of how far away Rico is.

The eastern coastline in the north of manaea. 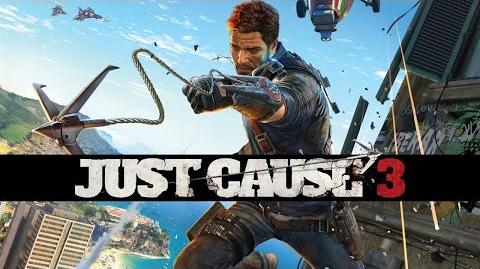