Mario Frigo is the deuteragonist of Just Cause 3.

Mario was good friends with Rico since their childhood, before Rico had to leave as a result of Di Ravello's takeover. Mario is the comic relief character of Just Cause 3. He is lighthearted and has a penchant of teasing people, mainly Rico. However, in dire situations, he is a very serious and straight forward man.

As revealed in the mission Abandon Ship, Mario likes Annika Svennson because "she's so manly".

According to himself in the mission Turncoat, he can feel "woozy from moving his hips".

He owns a disassembled Mugello Raffinati Vitesse, which is in need of restoration. Mario never finished it because he was waiting for Rico to come back and help him (possibly figuratively). He keeps it at Granmatre Frigo's house. She doesn't like it and considers it a wreck.

He drives a Stria Facocero in the mission Welcome Home.

As mentioned in Derailed Extraction, Mario can't fly a helicopter.

Before the events of Just Cause 3, Mario began a rebellion against Di Ravello's dictatorship. It is described by Roland Lesterlin to be "failing" until the arrival of Rico.

Mario fights in the ranks of The Rebellion throughout the storyline and is the one who organized and set up the Rebel drop. He believes that this angers Di Ravello and makes Mario more of a target than before. According to one of the tapes of Di Ravello's audio diary, Di Ravello actually considers Mario to be "an ineffectual buffoon".

During Son of Medici, it is revealed that after the events of the game, he hopes to turn the rebel drop garages into an international company that sells "fine automobiles." He insists that Rico should be his business partner. The company would be called "Frigo and Etcetera" and the slogans would be "Our sales are revolutionary!" and "Our prices are pure insanity!" Rico responds that "We'll see."

Just Cause 4 has multiple optional wingsuit colors. One of them, which is unlocked for completing all marked locations depicts an advertisement for this company. This suggests that in universe the company had began to exist by the time Rico got around to completely taking over Solís. The advertisement depicts a picture of Mario in front of the Medici flag and a Verdeleon 3 and the text "Frigo and Etcetera Dealers of fine Automobiles".

Although he doesn't physically appear in Just Cause 4, he does make a cameo in the "Getting Over It" easter egg, where he apparently said at some point "Playing Just Cause is like constantly teetering on the edge of chaos. Actually, there is no edge to teeter upon." His line is still read by Bennett Foddy.

Concept art during game development. Note that he looks a lot less goofy. 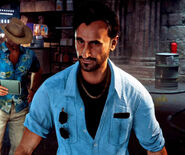 Mario with a sinister smile.

Mario in Abandon Ship, just as he's about to be elbowed in the gut by Annika. 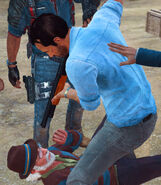 Mario is ready to shoot Zeno, after it's revealed the latter is a spy.