The Medici Police Department, also known as the Policia, is a state-run law enforcement organization in Just Cause 3.

No. At least not in the released game. There was a pre-release screenshot showing them (see below), but the organization itself actually never appears in the game.

According to the "The art of Just Cause 3" book that came with the collectors edition: "The graphic design on this police car was inspired by the Lamborghini's used in Italy's police force. As the game progressed and we phased out the police forces, these cars are now, for narrative reasons, abandoned throughout the countryside but still driveable."

They were the official police department of Medici. Their duties presumably included enforcing the law and stopping criminals. They even had a SWAT team during game development. The game still has character models for 3 of them. These are called "police_officer_001", "police_captain_001" and "police_swat_001".

According to one of the propaganda announcements from the broadcast loudspeakers, the police were corrupt, so Di Ravello had them replaced with an anonymous militia - the D.R.M. - who Di Ravello says are incorruptible and have made civilian life safer when in actuality, the police posed a threat to Di Ravello's power due to their adherence to their codes of ethics and due process. The collectable Di Ravello audio diary tapes reveal more about them.

According to the "The Art of Just Cause 3" book that came with the collectors edition of the game, the police stations are of the "International" architecture style and were built in the 1930s. They were taken over by the D.R.M. after Di Ravello took over.

The police stations are heavily fortified compounds with barbed wire and sandbags on the edges of the roofs. As with many other buildings in government-controlled towns, they have spray-painted graffiti on the walls.

All police stations are initially controlled by the D.R.M. who use them as their bases. This is why the stations have to be assaulted and conquered to liberate the Towns in Medici.

Some police stations contain small prisons with one to three cells. The prisoners have to be released during town liberation, but they often get killed in the ongoing shootout. Once released, prisoners will try to run out of the police station and out of the way of the militia.

See Prison (disambiguation) for other prisons.

A police station is designated a "Major settlement task" during a town liberation because they require at least two things done before this "destructible" is counted as destroyed.

All police stations require their gates to be opened in order to complete the location. There is a switch near the gate that can be pressed to open the gate and "Let the rebels in", but sometimes depending upon how much time has passed between you entering the compound and you opening the gate, the rebels might not show up because they might be dead. It is also possible to tether the gate open (Grapple the gate and then aim at the beam above and release, then retract).

From pre-release screenshots, they were known to have the following vehicles:

Rarely a D.R.M., or Medici Military soldier might take a police car to chase Rico, if they happen to be near one and looking for a vehicle.

One of the largest town police stations at Babica.

A police car in use by either an D.R.M. goon or soldier.

Unused character models spawned using a modification.
Add a photo to this gallery

Medici police in action in a pre-launch promotional screenshot. Urga Postolkas covering police action against members of The Rebellion. 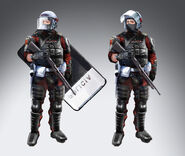 SWAT as seen during game development.

An early design. See more at Cut game content from Just Cause 3.

A concept for a police station building.
Add a photo to this gallery