The Mile High Club is a company with some notable buildings in the Just Cause Game Series.

The first time they are encountered is in Just Cause 2.

The Mile High Club is a night-club and brothel which operates directly on an airship. The Club is also a settlement which can be completed, counting towards the game's completion. The club also has a ground base, but that is not part of the physical "settlement".

There are many advertisement posters for the Club which are distributed and sported by the Public Transportation in Panau.

The club is believed to have been founded when Pandak "Baby" Panay wanted to make Panau a playground for rich, foreign tourists.

The owner of the club is a young woman named Mama-San Lee, as revealed in the featured mission. She stores information about all the visitors of the club on her computers, including President Panay. Rumor went around Panau that she may also have included "dirty" photos in her archives. The government subsequently heard the rumor and attempted to destroy the club with its own self-destruction bomb.

Located in the northeast corner of the map above the Pelaut Archipelago, the Mile High Club is a civilian night-club and brothel, which boasts a bar and dancers. It is guarded by shotgun-wielding bartenders, who can be killed easily. It is a unique area of Panau, as it is located on a luxury airship (a ship-like jet-powered vehicle, suspended in the air by two large balloons). The airship does not actually move in the game, and can therefore only be reached by an aerial vehicle such as Fixed-wing aircraft or a helicopter. Fairly unrealistically, the music can be heard from nearly a kilometer away. There is also an area below the club itself, with some catwalks around an open hole. The self-destruction bomb is placed here. It's supposed to be removed in the featured mission, but oddly, it respawns there when getting there again. See also: Mile High Club (mission).

Once on board, the only ways to get off the airship (assuming the access vehicle was destroyed or abandoned), are BASE jumping and the Cassius 192, located at the aft of the ship. The purpose of the Cassius 192 could be a means of quick evacuation of crew and passengers during an emergency. It is almost impossible to land the plane where it is situated, and there is no evidence of a crane, so the plane must have been placed there by a ground based Crane while the airship was closer to, or indeed on, the ground.

Oddly enough, the airship has almost no way of landing, because the engines are the lowest parts. Salty sea water would ruin the engines, so it couldn't land in water either. It could, however, be docked to an elevated spire, like the dirigible tether atop the Empire State Building in New York City.

A few kilometers away, to the north-west, from the airship is a "Mile High Club" ground base. It can be identified by the large white signs which are backlit blue. The ground base has two red Rowlinson K22s, on a helicopter landing pad. This is where the mission, Mile High Club, begins. The ground base has a couple of buildings with the wall-mounted screens that show a woman dancing. There is no road to get to the two Rowlinsons, coming from the front of the entrance, instead the player has to go by foot, or by a very small path to the far left of the base. It is just wide enough to fit a small car, but bigger vehicles need to be left at the front of the base. The ground base is just north of a highway junction. This ground base is not a discover-able settlement, but it has two collectibles around the site. The Rowlinson helicopters appear to be the vehicles used to carry people from the ground base to the club itself. This is very inefficient, because they can carry only one passenger each.

Completing the airship does not prevent the mission.

One of the parts is located on a lower deck. The stairs which lead to it are near the plane at the rear of the ship.

The ground base has 2 resource items, but these do not affect the completion of the airship.

The airship is one of the highest locations in the game and can be used to gain the "I Believe I can Fly" Achievement/Trophy. It is accomplished by BASE-jumping 1000 meters (1 km). Jumping from the top of the blimps can easily achieve the Achievement/Trophy. Tip: Do not open the parachute until you're close to the ground.

The airship itself does not move and can not be made to move.

There are two wrecks of Mile High Club-class airships in Medici, proving that there were at least two to begin with and making it possible that the company could operate a whole fleet.

The airship has crashed at a beach in Medici. This is considered to be one of the Easter Eggs in Just Cause 3.

The balloons are completely gone and the wreck is extremely rusted and mostly non-existent. Most of the wreck is under water. The front end is so deep that it's barely possible to dive to it without dying. Two Inflatable liferafts at the crash site have not been deployed and the wreck is abandoned.

The same rafts can be found at several more coastal locations. They can be deployed if grappled to the ground. These are also listed among Easter Eggs in Just Cause 3.

Although unrelated, there is a rideable cow nearby, which is another easter egg.

The Bavarium Sea Heist DLC adds one more wreck under the western edge of the Stingray. If this additional ship is to be considered canon, then it means that there are an unknown number of ships in this ship class and that the crashed ship on the beach is not necessarily the one from Panau.

There's a building on the side of a mountain with the exact Mile High Club logos, indicating that it's owned by the same company.

It's located in the Umiña region, to the north of the region name on the map and to the south-west of Villanueva. The building can only be accessed by helicopters (there are two landing pads), or by parachute/grappler/wingsuit.

It's a small white building on a cliff. The building has two internal areas, but one one of these is accessible. Inside are people dancing while it is playing JC4 trailer music by Artizan and Armanni Reign. The club has two helicopter landing pads.

There is a woman with a very rare character model playing golf on one of the landing pads. She might be a separate easter egg to something.

The famous DJ Santosi can also be seen on a stage in the club. 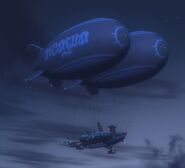 Seen from a Pell Silverbolt 6.

Two female strippers in the front part of the airship.

One of the armed bartenders present at the club.

As seen from a Rowlinson K22.

The assortment in the bar.

A glitched UH-10 Chippewa at the back.

The barmen armed with shotguns here.

The bomb mount for the bomb after the mission that takes place here.

Rear end at the beach.

At the Stingray. Water is cleared using a glitch.

Another wing from the Mile High Club.

One of the Mile High Club balloon cable holding arms. 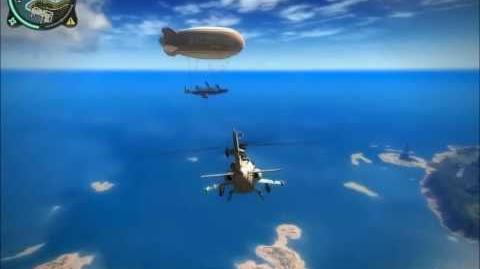 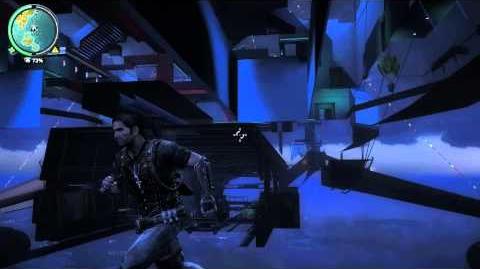