Military bases are heavily defended military settlements. Bases can be taken by beginning the liberation mission with the guerrilla near the entrance and following the steps. Though the takeover works the same as with a village, the increased firepower of the enemy increases the difficulty sharply.

The most commonly encountered base is a simple encampment. These are often the easiest to take, yet offer few rewards in the way of vehicles. Also frequently encountered are rotary bases, those focusing on helicopters or as their main source of firepower. Often encountered are air bases. These provide planes, and often jets, such as the Ulysses-McCoy Redcloud. Perhaps the rarest bases are naval ones. There is only one of these present in the game.

If approached while in government possession, Rico will gain a medium wanted level. If approached with a helicopter the Automatic surface to air missile launchers will start to move and shoot at Rico. If Rico is on foot or driving a car/bike, a armed helicopter will spawn out of the sky and start shooting at Rico. Note that when getting to a liberation briefing, this will happen. This is probably made to be like this as the current political scenario has a situation where only government personnel can enter the base with permission, meaning that if someone else approaches the base, e.g. Rico, Guerrilla forces etc, will be shot at because the base's occupants will think that Rico will take over the base, though the main aim of the game is to liberate these bases.

A military base liberation is really nothing more than a village liberation, but there will be enemy armored vehicles and a lot more soldiers shooting at you, so take that into consideration assuming you want to take one over.

If the player desires a advantage, Rico can find an armed vehicle, like a Guerrilla Shimizu Tumbleweed. This should provide an advantage and you should have an advantage, since the mounted gun is auto-aim, unless of course, the attack helicopter has missiles and even when you are not technically "in" a vehicle, the AI will still use missiles.

All who wish to conquer ("liberate") any bases with the aid of hijacked attack helicopters should take into account the automatic surface to air missile launchers and take necessary precautions, such as (but not limited to):

There are several Guerrilla bases hidden in the jungles, that don't appear on the map. These bases rarely offer any vehicles. Usually they have only Wallys GP's, but some of them even have Jackson JC - 2 Alamo helicopters. All of the military vehicles are unmarked, but a few bases offer vehicles with weapons.

The vehicles provided at military bases are in the livery of government forces. These are often the more powerful and rare vehicles, such as MV's or the Rage-Johnston F6 Comet. Oddly enough, there's 3 bases with no vehicles. This either means that all the vehicles are busy, or that those are very low-priority bases that just haven't been given any.

This gallery isn't supposed to contain tens of pictures. It's for examples only.

Ulysses-McCoy Redcloud at the Quesada military base.

The unmarked base that's seen in Sink the Buccaneer.

Unmarked base in Provincia Aguilar. 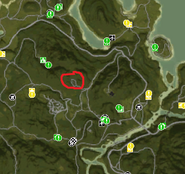 Unmarked base in Los Hidalgos.

San Esperito unmarked points of interest map. The map contains all known unmarked bases.
Add a photo to this gallery

This video shows how to use a land vehicle and helicopter to "liberate" a military base.

Start a Discussion Discussions about Military bases in San Esperito