The Montano Cartel are a drug cartel in Just Cause (1).

They're the only opposition and competition for the Rioja Cartel. Their faction color is purple. In-universe, they are obviously identical to the Riojas, but they're friends with Salvador Mendoza.

They have many villas / drug plantations scattered all over San Esperito, that can be taken over by the Riojas, with Rico's help. Once taken over, these villas often provide ground vehicles and always provide a helicopter. The Montano cartel will chase after Rico if Montano Heat is gained at any time. They are usually seen getting into gunfights with the Guerrillas and Rioja Cartel all over San Esperito.

Strangely, despite mission information, according to which they're on Mendoza's side, they can get into gunfights with local law enforcement and even the military. Sometimes, if you have heat and a military or police vehicle arrives they will suddenly ignore you and start shooting at them.

This Montano grunt wears a cowboy style hat, and he specializes in the Haswell Gen2 Vindicator.

This Montano grunt wears sports clothing. The weapon he is using is a Aviv Scarab.

A Montano elite. This one wields the Moretti CCW Centurion.

Rico fighting with a Montano subteniente.

A Montano subteniente who is being killed by a Rioja soldier.

A soldier wielding a Aviv Panthera during the mission River of Blood.

Does anybody notice those markings on his arms? 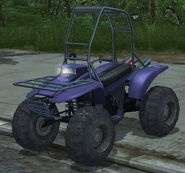 Fukuda Buckskin Trapper. This appears only at the unnamed coca field after the mission Field of Dreams.

Hurst Buckaroo with mounted gun. This can appear at a high Heat level. Can also appear at the unnamed coca field featured in the mission Field of Dreams.

A Vanderbildt Route 66. Appears during Test of Loyalty, Field of Dreams, and is parked at one cartel villa.

The Shimizu Tumbleweed equipped with a mounted gun. This vehicle only appears during the mission Test of Loyalty.

The Battaille GPT-6, exclusive to the mission Test of Loyalty.

One of their special Vanderbildt Route 66s during Field of Dreams. It contains toxic barrels that can destroy the crops. 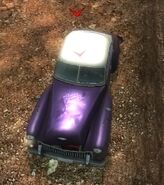 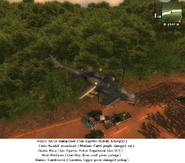 Huerta PA51 Aztek: "Montano" version at the back and "Police" version in the front.