PAN MILSAT (Panau Military Satellite) is a military base and notable building in Just Cause 2.

The satellite dish in the base measures about a kilometre across. The base itself is a circle around the gigantic satellite dish, with 8 towers (4 to manipulate the dish and another 4 to hold the satellite receiver up), placed opposite to their counterparts across the dish. The small towers can be entered and houses each a control panel to manipulate the dish that only can be accessed during the Ular Boys mission Taking Care of the Dishes.

It's not completely explained, but during the mission Taking Care of the Dishes, it's said that the military uses it to track the Ular Boys activities in the area. This base is a part of the Panauan Space Program.

It also doubles as a great Stunt park for cars or motor bikes.

One resource item is inside a control room and can be entered through a doorway on the tier above it. It may seem closed off but that the item is located at the bottom of a staircase within the tower. Another way to access that resource item is to start Taking Care of the Dishes, find the red beacon showing the first control panel then go down from there. It should be there

This is actually pretty high.
Add a photo to this gallery 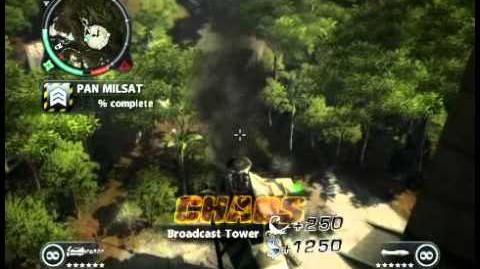 Retrieved from "https://justcause.fandom.com/wiki/PAN_MILSAT?oldid=166827"
Community content is available under CC-BY-SA unless otherwise noted.