The PDA (Personal Digital Assistant) is a piece of equipment in the Just Cause game series.

It's a device used by some secret agents, which functions as the in-game options menu. It can be used to call in an extraction or heavy drop in times of need, shows statistics and provides a detailed map with location markers, race markers, mission trigger points and other items of interest.

In the PC version it freezes the game and the PDA is a small pop-up window. In the PS2 version the PDA has its own menu, accessed with the SELECT button.

In JC3 the PDA is called "commlink". The Agency is said to have given these to all rebels.

Different pre-announcement leaked screenshots show the PDA completely differently. In some it was displayed on screen over Rico, as a pop-up window that breaks the fourth wall and in some it was an in-game hologram, projected by the Grappler. The new grappler has a curved and presumably flexible screen on it. The screen shows an outdated PDA design that was seen on some of the leaked screenshots. A full-size plastic replica of the grappler, that was a part of the "collectors edition" of the game, has that same image as used in-game. See Cut game content from Just Cause 3 for more about this.

The final design of the interactable PDA is similar to that of JC2 in the sense that it works like a pause menu with none of the game being visible from the edges.

JC1 political map with a list of all Provinces. 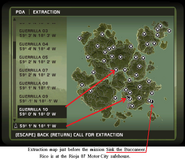 JC1 - The PDA extractions map can extract Rico to any safehouse, or to the trigger of the next storyline mission (if there are any available).

JC3 One of the pre-announcement leaked screenshots from november 2014.

JC3 One of the pre-announcement leaked screenshots from november 2014.
Add a photo to this gallery
Retrieved from "https://justcause.fandom.com/wiki/PDA?oldid=160634"
Community content is available under CC-BY-SA unless otherwise noted.