This article is about the oil industry in Just Cause 2.

Some of the content of this page is speculation, but based on in-game evidence.

The Panauan oil company is owned by the government.

As revealed in the last Agency mission, A Just Cause, Panau has the largest oil reserve in the world (Selatan Oil and Gas Fields) and all of it is controlled by the government. At the end of the mission, the oil field is supposedly contaminated by a nuclear explosion. Of course this is ridiculous, as the radiation from a nuclear explosion would be harmless against the undersea oil field. The waters above the oil field are also very deep and that makes the scenario even more ridiculous.

Another large oil field (Panau Barat Oil and Gas Fields) was also found for some years ago west of the Lautan Lama Desert. It is from here that most of Panau's oil comes from. Some of the gas rigs might also produce minor amounts of oil with the natural gas, for example the Selatan rig. The selatan rig is located close to the large oil field there, which makes that seem like a likely theory.

It is speculated that the special rig at Gunung Tasik once produced oil and gas, but the reservoir was very small and went empty after some years. The rig was then rebuilt to a research facility.

Nothing is known about the quality of Panauan-made fuel, but it's definitely not the best in the world. There's a newspaper in the ending cut-scene of the Just Cause (1) mission "Good Cop, Bad Cop". One of the articles says that "Scientists all agree: EL gas (the official fuel company of San Esperito) is the best gas in the world!"

Though, as revealed by Razak Razman during the mission "Oil for Blood", Panau imports much oil from Brunei, evidencing that the production inside the country, most of it probably from Pelantar Minyak Gerudi Besar, is either too small to meet the demand in Panau, or Panau has applied what could be called the "Singapore model" to its oil industry. The real world Singapore, not likely being very far away, has since a while been a significant oil refining hub, whose business model consists entirely of importing crude oil, processing it and then exporting the finished products. Some of the refinieries in Singapore are among the largest in the world.

Nothing is known about the daily capacity at Pelantar Minyak Gerudi Besar, but judging by common numbers for fixed shallow-water platforms, it would probably be at least 5000 cubic meters per day when the well first was drilled.  Assuming that Panau has a population size somewhere in the range of 400.000-600.000, based on its geographical land area and a rough estimate on population density that likely isn't  much higher than 1000 people per square kilometer, also assuming that the oil consumption per 1000 people is lower than that of Malaysia (what one would assume to be a much more developed country), which, based on 2015 numbers from Wikipedia is about 5 cubic meters per day adjusted for population size, but somewhat higher than Indonesia, sitting at 1 cubic meter/day per 1000 people and taking a number in the middle, 3 cubic meters/day per 1000 people, this would be equivalent to a consumption of 1800 cubic meters per day on a national level if the population is 600.000. Thus, the production at this rig could roughly match the domestic consumption, worst case scenario, or it is likely slightly higher than the consumption, thus, the Panauan oil industry has adopted a similar model to the one in Singapore. If there are any exports of domestic production however, they are likely insignificant. If the Selatan Oil Field ever was exploited however, then they could export a lot of oil.

The government likely still earns a big profit selling its natural gas to other countries and selling its domestic oil products to the inhabitants in Panau.

All properties of the company are:

Even if the company produces quite significant amounts of oil, the most significant product is Natural Gas, with 10 offshore rigs and the majority of the Pipelines being used for the production and transportation of natural gas. The gas is mostly used as a thermal energy source at most types of houses and building, or at thermal water stations. Using natural gas as power source is better than oil and coal, as it produces twice the energy compared to the same amount of oil and coal. It gives almost no air pollution either such as sulphur dioxide or particles.

Much of the gas is probably consumed inside the country, but some of it may be transported in an undersea pipeline to Malaysia or Indonesia, as these countries are not so far away. A lot of gas is also transported to various points of consumption in Gas Tanks. Some of the gas is also stored in large containers known as Gas Holders.

The company also produces, to sell at Gas Stations. They are currently producing what is believed to be either Methanol or Ethanol at 15 Bio Fuel Shafts. Ethanol is though what is mostly commonly used for propulsion. There might be other fuel produced as well, such as bio gas, but that is unconfirmed.

The Bio Fuel Shafts can for example be found in Selatan Archipelago, producing Ethanol from plants or trees in the rain forest in the area.

Apart from the government, many other have a less or higher interest for the oil and gas reserves.

The factions are usually not interested to attack the oil and gas industry. All of the factions need for example fuel for their vehicles.

Razak "The Razor" Razman wants to control the oil industry in Panau to get the Roaches a lot of incomes. They eventually do, after taking over the Emas Hitam Oil Refinery, and then they gets at least half of the incomes. They do actually not want to destroy the refinery.

Bolo Santosi of the Reapers is "in love with money", according to Sloth Demon, and is very interested in the oil and gas reserves. If she was the president of Panau, she would have sold much of the oil and get very rich out of it. Ironically, she wants Rico to destroy one of eleven offshore rigs and a Bio Fuel Shaft in two separate missions, though her reasons were mostly for destabilizing the regime.

The Ular Boys and Sri Irawan do not actually care so much about the oil and gas industry. They are only stealing fuel from depots and Pipelines.

Apart from the factions, the three superpowers; Japan, China and Russia are very interested in the oil and gas reserves. They believe they can support the factions until a regime-shift, and then take much of the incomes from the industry. Rico is able to stop their each representative in the mission "Three Kings".

Since the early of the 20th century, it was known that minor pockets of natural gas existed under the seabeds in Panau. but with the technology of that time, it wouldn't have been viable to extract it. New readings have been done under the last years of the 20th century, and the gas pockets was quite bigger. Panau have always been forced to import oil and gas before the time of Pandak Panay.

In the early time of the 20th century, the Panauan system of paved roads was not yet built, and the dirt roads were pretty bad to drive on. As a result, the demand for oil was quite low, with a likely exception for kerosene which has been used as lamp fuel in the past. When Panau City soon started to expand and upgrade its road network, it is likely that the ruling colonial power insisted on building oil harbours in the Pelaut Archipelago, for example Pulau Kait and Kuala Cengkih, and also built Panau's first oil refinery, Emas Hitam Oil Refinery, in a small valley on one of the north-east islands in the district. It would be cheaper to import crude oil instead of buying the refined products from other countries.

It continued in the same way under the time of Papa Panay. At least one new port was built for oil import to meet the rising request of petroleum products. A proposal was left to the government to build a new oil refinery, but instead the government upgraded the old refinery and increased capacity of it. The seabed readings of the gas pockets still appeared small, so the pockets were ignored.

Pandak "Baby" Panay saw something with the gas pockets his new regime erected a total of 11 Offshore Rigs in the Panauan waters and one lone rig in the mountains at Gunung Tasik. A new refinery was built at Pulau Berapi, and the military was enforced. Geologists did readings on the seabed outside Kem Pulau Kerbau, and found a huge oil field. It was a secret for a time but Panay planned to exploit it.

The heart of the Panauan oil industry is located on the north-east islands of Pelaut Archipelago.

The Panauan Navy controls all of Panau's offshore rigs, but civilians are allowed to work on them. All but one of them are for natural gas. The single oil rig is Pelantar Minyak Gerudi Besar.

The Panau Military has set up a system of pipelines all over the islands, that are run by civilians. Some Military Bases are centered over the pipe system. There are several pipe outposts around the country, as well as Fuel Tanks for storage. Most of the pipes are for natural gas, but some are for oil. These link the oil from the Emas Hitam Oil Refinery to the Gas Stations or other facilities.

Emas Hitam Oil Refinery is Panau's central refinery. After the oil was pumped out of the ground and seabed the oil is shipped to this Stronghold. Here it's refined into gasoline and pumped to gas stations and/or shipping ports.

Unlike the other refinery, half of the oil refined here is imported from Brunei.

Pulau Berapi is the second oil refinery in Panau and is also a large shipping port. Here the oil is refined in mostly diesel, but also some other products like Jet Fuel, Asphalts and plastic components.

It is not and it can't be confirmed, but the industrial structures around the oil harbor, in the north-west part of the harbor, might be an oil refinery. This would then be the smallest oil refinery in Panau. Many of the major harbors in the real world has got oil refineries.

There is at least two fossil fuel power stations in Panau. For more info about the Panauan power grid see: Electric Power in Panau.

Most of the oil facilities store a small amount of oil, but one facility has a purpose of only being a storage depot:Pekan Hutan Buluh.

There is one iron ore smelter fueled by oil in Pelaut Archipelago that goes by the name of Bandar Lombong Besi. It is the only known smelter in Panau.

There are two facilities in Pelaut Archipelago that handle oil with unknown purpose: Kampung Perigi Hitam and Kampung Langit Berasap.

There's one facility that is only a bio gas producing facility, and its name is Pekan Cahaya Matahari.

As stated above in one of the sections, Panau imports much oil from Brunei due to the national production being too small to meet the request. Note that not all ports are for transporting oil, despite the amount of Fuel Depots and Fuel Silos. That's because all ports store large amounts of fuel for the ships. 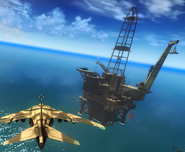 Map of the Oil and Gas Fields in Panau.
Add a photo to this gallery
Retrieved from "https://justcause.fandom.com/wiki/Panauan_Oil?oldid=157458"
Community content is available under CC-BY-SA unless otherwise noted.