Pipelines in Panau are sabotage destructible objects in Just Cause 2.

They are gas pipelines. There are 55 total Pipeline Stations throughout Panau. Most of them are found near military bases. Pipelines are very easy to destroy: one just needs to follow the pipe to the control panel, overload it and watch the fireworks. The Panauan pipelines seem to be around 80-90 cm in diameter. They are used for transporting Panauan Oil and gas and are located throughout the nation. Most are used for natural gas.

For general information on real pipelines, see the wikipedia article.

They need a manual over-ride to overload the pipeline and cause it to explode. The over-ride is done by accessing the line's control panel. There is no other way to destroy the pipeline. They are usually very lightly guarded, with a maximum of two random Panau Military soldiers and a couple of civilian workers, with the exception of pipeline control panels that are inside enemy base and harbor perimeters. However, outside of bases, these can be a pain to find. The only indication of a pipeline being present is a small, unidentified line on your HUD map. Once you have a visual on it, you can just simply follow the line to the control panel and hack it. Do take care and get quite a way from the panel after hacking it, as the explosion that occurs is really powerful. Please take note that is also ill advised to land your helicopter near it when you hack it, as the helicopter will not take off in time to get clear of the explosion. Alternatively you could use the grappler and parachute to quickly get away. Each one destroyed will give 1000 Chaos points and $5000.

As with any sort of hacking, if Rico is shot whilst doing this, the hacking will fail and must be started again. To avoid this happening, kill any soldiers nearby. Usually pipelines will be far away from the main part of the settlement, where reinforcements will almost never show up. Even if they did, they would have given Rico ample time to hack into the pipeline and when they arrive it will be either too late or they will get caught in the explosion.

There are actually a few sections of the Pipelines that go above ground. But that's not uncommon. Most Pipelines used for local transport are usually located one meter under ground. That's even evidenced by a small visible section in a dug hole at a construction site in Kota Pantai Kuala, on the town square. Finding one is various in difficulty as they are very easy to notice but are randomly dotted around Panau. Sometimes all you need to do is find one part of the pipeline and follow it from there. Eventually you should find the terminal in which you must override.

There's a total of 55 of them. Some pipelines (like the one at the Unnamed outpost at X:8300; Y:28370) don't have a control panel and cannot be destroyed. This list only includes the destructible ones. 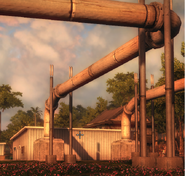 A pipeline under construction, just outside of Pekan Selamat.
Add a photo to this gallery

Retrieved from "https://justcause.fandom.com/wiki/Pipelines_in_Panau?oldid=145445"
Community content is available under CC-BY-SA unless otherwise noted.