The Prizrak U4 is a SMG in Just Cause 3.

It looks like a sawed-off shotgun, but with an additional vertical front grip and a long straight magazine.

The Rebel drop description says: "The Prizrak U4 is like getting rapidly bitten by dozens of mosquitoes, only replace "mosquitoes" with white-hot lead. Great for close-quarters combat."

It takes a lot of fire to kill someone, so in terms of time needed to kill, it's less useful than U-55S Pozhar, the D.R.M. pistol. 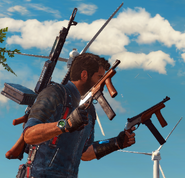 Wielded by a Rebellion soldier. This is very rare to come upon.
Add a photo to this gallery
Retrieved from "https://justcause.fandom.com/wiki/Prizrak_U4?oldid=148770"
Community content is available under CC-BY-SA unless otherwise noted.