Provincia de Los Guerreros is a Province in Just Cause (1).

It's one of the medium provinces in San Esperito, in this province there are three of the four places where the mission Brothers in Arms take place. The island is dominated by small jungle-covered mountains, only the northern half is mostly plains without settlements.

Some of road ends are near each-other, so it's easily possible to drive through the jungle to get to another road or travel from one side of the province to another side of the same

There aren't towns or cities, only villages.

There is a Ballard M5B1 Scout at a hidden location. The area has a few small houses and there are civilians walking around, but it's not known who owns it. It's located in a small valley, surrounded by steep cliffs. The jungle keeps it completely hidden from aerial observation (see the gallery below).The valley entrance has a wire fence with barbed wire at the top edge - just like the fences around some military bases. There's a gap in the middle of the fence, so it's not really obstructing anything. Be careful when driving it out, as the Red Barrel next to some wooden boxes will explode when hit. That won't destroy the vehicle. Perhaps it's meant to keep out intruders who attempt to drive this vehicle away.

There is a medium unmarked military base located to the east of Rioja 04 "Eagles nest". It's somewhat closer to the supposed medical facility which is destroyed in Love is in the Air. Two vehicles spawn there: Vanderbildt Route 66 and Jackson JC - 2 Alamo.

To the side of the road near to Villa La Sierra Cartel villa there are two broken Vanderbildt Route 66s. Right across the road from these there's a strange flat cliff.

There is only one Guerrilla safehouse: Guerrilla 08 "Camp Laguna", this safehouse is of a "marine" type, as it has an harbor and a hangar but oddly, no boat or ship spawn here, one way to access this safehouse is by the river in the front, but that river is not connected with the sea; in front of this safehouse there is a Small broken ship.

The province is located in the top north side of San Esperito, between "Provincia de los Bravos" and "Provincia de San Mateo", to the south-west of Provincia de Rio Negro 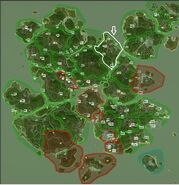 Base de Los Guerreros, military base

Third place where take place the mission Brothers in Arms.

Fourth place of the mission Brothers in Arms.

An Unmarked military base.

A set of 2 windmills located in fron of Guerrilla 08 "Camp Laguna" safehouse.

In the middle of Provincia de los Guererros.

Picture of the side of the island where Provincia de los Guerreros is located .
Add a photo to this gallery
Retrieved from "https://justcause.fandom.com/wiki/Provincia_de_los_Guererros?oldid=145165"
Community content is available under CC-BY-SA unless otherwise noted.