Pulau Kait is a port in Just Cause 2.

The port is the third biggest in Panau, after Pelabuhan Saudagar and the neighbor Kuala Cengkih. It's filled with destructible objects like gas holders and fuel depots. There are no SAMs in the area, nor are there any in the neighboring port Kuala Cengkih either. This makes helicopter attacks a good choice. If you don't have a helicopter, you can sneak into the port and steal an AH-33 Topachula, which is located on a helipad near the south-east corner of the port. However, beware the soldiers in the area. If you get spotted, the soldiers can do heavy damage to the helicopter when you try to take off, as the Topachula lifts off very slowly. Civilian workers and vehicles can be seen here. There's also an emergency power unit with some generators in the case of a blackout. The port will be deserted by the military after completion.

It's one of Panau's primary oil importing ports. No other ports have so many targets clustered together like this, other than Pulau Berapi which is an oil refinery. Actually, there are very few settlements in general that have so many targets. Most of them are objects containing flammable liquids or gases. It's also used for container trading and such. As stated above, none of the two ports in the area has any SAM sites, so attacking it with a rocket-armed attack helicopter will make for one of the longest (and funniest) raids you ever will have in the game, only being beaten by Pulau Berapi. While the total amount of destructible objects at both the Pulau Kait and Kuala Cengkih is 72, Pulau Berapi has got 77. However, Pulau Berapi has a lot of SAM sites, making the destruction much more difficult. Not even Panau City has an easier raid, since the objects are so spread out around the city's districts.

Panau's longest pipeline starts within the edge of the port at the entrance road, close to the Pandak "Baby" Panay Statue. It goes 2.3 km from the port, to its control unit north of Koji Kuasa Panau Utara power station.

There are two container ships ships in the area, but they are not drivable vehicles and can't be destroyed. This is because they are programmed as buildings.

The port probably also serves as a district heating station, as there are several industrial chimneys in the area. But the entire area could also just serve as some type of petrochemical factory, a type of chemical factory which's chemical products are based on petroleum (oil).

In general, the settlement consists of a dozen of industrial buildings, 2-3 warehouses in the western port, two towers of unknown purpose next to the western dock, two major docks with 2 cranes each, about 8 small oil cisterns spread out in the middle port, a grind-gear section with most of the generators, and a section for storing most of the flammable liquids and gases at this port. Lots of container stacks can be found at some points in the harbor. A military bunker building can also be found near the south-east corner, next to the already mentioned helipad.

You would do better to go through this port systematically and destroy everything you see, otherwise it can be difficult to complete. In total there are over 16,000 Chaos points to acquire.

A communications outpost, Kepulauan Pelaut Alpha, is located just south of the port.

Although the area is barely smaller than that of Kuala Cengkih, this port could be larger in the means of cargo volumes. There are more cranes and container stacks in the area, more oil cisterns and more objects in general.

This port boasts the most Gas Holders in Panau, with 6 in total.

The port was likely erected together with Kuala Cengkih under the colonial powers' time, and it's speculated that its primary purpose was oil import. It's most likely still used for import of crude oil from Brunei, but due to the exploit of the Panau Barat Oil Field, the imported amount is likely very much smaller.

The destruction part is about 84% of the completion.

X:23475; Y:5025 in Pelaut Archipelago. It's right next to another port, Kuala Cengkih Port, which is on the other side of the water. There's a bridge between them, which doesn't belong to the ports. It's a public road.

View from the eastern side of the port. 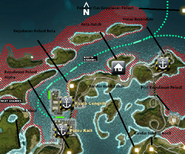 Map over the nearby area.

Seen from the north.

View from the north-east corner of Kuala Cengkih. Pulau Kait can be seen on the left.
Add a photo to this gallery

Retrieved from "https://justcause.fandom.com/wiki/Pulau_Kait?oldid=140737"
Community content is available under CC-BY-SA unless otherwise noted.