The Rioja Cartel (pronounced Rioha and sometimes called Riojas Cartel) is a faction in Just Cause (1).

Like their rivals the Montano Cartel, they are involved in the growing and distribution of drugs. Their Faction color is yellow and they can usually be seen driving Cutler-Randall Conquistadors.

The Riojas assist the Guerrillas in taking San Esperito back from Salvador Mendozas dictatorship. This alliance is seen in action in the mission Dismissed Without Honors and Taking Out The Garbage.

They do some of their business deals in hotels and at the El Toro Loco nightclub.

According to the game manual, all Races in San Esperito are hosted by them. The man who stands at the start of the race and measures time does not wear Rioja colors.

The boss is never introduced by name, but it's believed that his name is Edmundo, as during a mission Inmaculada Palmiera tells Rico that "Edmundo will be so pleased. He will contact you soon." in a way that implies he's her superior in the cartel. Sometimes the objective in a side mission will be to eliminate either a Montano Cartel officer or a San Esperito Military officer. The person who gives the objective will say "Hit someone for Edmundo".

According to one side mission, they buy their explosives from the Guerrillas for "bags of bills".

Rico Rodriguez first comes across the Riojas in the mission The San Esperito Connection, when he assumes the identity of Franco Alifano, an American who requires a steady supply of drugs to New York. He then works with the Riojas to deconstruct the empire of the government-backed Montanos.

The Rioja boss, who's in charge of liberations and side missions, is located in front of the villa for the liberation and usually behind the villa for sidemissions. His weapon is a Aviv Panthera.

Rioja soldiers fighting during a Cartel Villa liberation and one of their vehicles.

Rioja soldier, first style: wearing formal clothes. the weapon use for him is a Aviv Scarab

Rioja soldier, second style: wearing a cowboy style, the weapon use for him is a Aviv Scarab.

Rioja soldier, third style: a stronger man, the weapon use for him is a Moretti CCW Centurion.

Rioja soldier operating a Mounted Gun of monster truck "The Vampire".
Add a photo to this gallery 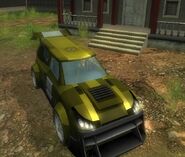 The Vampire, near to its safehouse "Rioja 03, Lava camp" safehouse.

Garret Paladin near to its safehouse "Rioja 05, Wavebreaker base".

Ballard M5B1 Scout at Esperito City next to a Delta MAH-15 Chimaera at "Rioja 07, Motor City".

Stinger GP at Rioja 08, Jackboot base.

The patrol vehicles of three factions involved in a shootout: Wallys GP of the Guerrillas (left), Huerta Mesa of the Police (center), and Chevalier Street Bird De Luxe of the Riojas (right).
Add a photo to this gallery

HH-22 Savior, during the mission Field of Dreams.
Add a photo to this gallery

Rico meeting the Rioja boss and his wife Inmaculada, in the mission Test of Loyalty.

Locations of the safehouses in San Esperito. See also: Maps.
Add a photo to this gallery
Retrieved from "https://justcause.fandom.com/wiki/Rioja_Cartel?oldid=119517"
Community content is available under CC-BY-SA unless otherwise noted.