Rogue Agent is the eight and last mission in the Danger Rising DLC of Just Cause 4.

Quote from the map marker: "Rico's onslaught of destruction has drawn out Emerson Miller. Sheldon has the location of his flagship."

After completing all submarines off the coast of Solís, this mission will be accessible on a beach east of Aeropuerto General Benitez. Several Army of Chaos ground vehicles (these may differ), along with a Huntsman SAM launcher, some stacks of equipment and some soldiers are present at the mission trigger.

It's advised to bring your favorite weapons, which ever they may be. At one point the mission provides infinite ammunition during the destruction of the USS Statesman.

Tom Sheldon explains that the "Tried and True Rodriguez Method" has managed to draw out Emerson Miller. Looking through binoculars, Tom mentions that he still doesn't know what Miller's primary objective was, but he seems to be preparing to leave in his flagship, the USS Statesman. Tom reminds Rico to obtain Miller's briefcase, as it's the only way to deactivate the tracker.

Get to the USS Statesman and explore itEdit

When you gain control of Rico again, you can see the USS Statesman about 2-3 km off the coast. Notice that the Army of Chaos vehicles now include a Bloodhound Siege Heli. The player may use any random vehicles.

Tom will immediately tell you to hurry, because Miller will escape as soon as he spots you, but really this part of the mission has no time limit, so take your time.

On the way Tom and Rico talk some more, with Rico inquiring about the intel for this mission, defenses, and personnel in that order. Tom will respond by saying that this is the USS Statesman, Miller's command ship; Sheldon then mentions that Miller hasn't set up any infrastructure, making the entire submarine raw firepower; and finally he will say there is a "metric ****-ton of agents" for personnel. Rico wonders why Maria tipped them off and Tom responds that: "You really going to give people shit for betraying The Agency?"

Once Rico is within about 200 meters of the submarine, Miller will have a brief chat with Rico, and then announce to his crew that Rico is here and orders them to kill him at all costs.

Notice that the submarine is equipped with 6 artillery turrets, so don't go too close just yet. Use the missiles from your helicopter to eliminate these from a safe distance.

1 A5 Coyote Assault Chopper spawns every few minutes, but they'll go down after 2 missile hits.

This seems to be a usual submarine, but with 2 automated MG turrets above strategic doorways. These are easy to destroy by small arms fire.

Even before boarding the submarine (assuming that the player has been in the air for a few minutes), Tom tells Rico to "grind on the electro-mag cables to bring up the weak spots". These "weak spots" are big circular "power conduits". There are 16 of these. Some are inside and some are outside the submarine.

Riding on the cables makes them rise out of their walls/floors, exposing their fragile red-glowing internal parts. They can be destroyed by any weapon. A SW9 Assault Rifle requires about a magazine of hits, but the Sequoia 370 Mag-Slug can do it in 2 hits.

After 4 conduits are destroyed, Sheldon will chime in over Rico's grappler.

Sheldon: "Keep going, kid."
Miller: "Tom Sheldon! Was hoping you'd be here. They gave me your chair when they put you out to pasture. Smells like a humidor."
Tom: "That's good. Your old chair smelled like an asshole."
Miller: "Always the class act, Tom."

At some point when the player is destroying conduits at the front of the submarine, all the missiles launch. The missile hall (room with the silos) is then full of white smoke.

When 7 conduits remain, Miller announces that: "All hands, we are losing power! Get systems back online!" Rico will reply with "Crew's only as good as their captain, Miller., to which Miller will reply "Shut up, Rico."

When 3 conduits remain, Rico will say: "Time to abandon ship, Miller". Miller, angry at the reality of the situation, replies: "Grrr... shit. All hands, this is Miller. Prepare to abandon ship." Rico then laughs.

When the last conduit is destroyed, a cut-scene begins where the submarine explodes. Miller is shown to escape in a C3 Canvasback Hovercraft. This starts a tedious chase sequence.

Miller drives through the wreckage and a number of agents (standing on drones) are trying to stop you. Open your hoverboard and chase after him!

It's impossible to grapple to the hovercraft, but conveniently Miller waits for you when ever one of his missiles has blown you off the hoverboard.

Miller tells you to just take off the grappler so The Agency couldn't track him, to which Rico retorts that that is too easy.

The chase passes over a minefield and approaches a small island south-east of Isla Amarilla.

Tom points out that Miller has another ship behind that island, but Rico responds that he sees it and that Miller isn't going anywhere.

This is the same type of Agency cruiser as can be seen near the USS Conquest and USS Westward, except that it lacks the large radar.

A cut-scene begins when Miller approaches it. Miller and Rico both jump on the deck and Rico demands that Miller hand over the briefcase, but Miller yells "Fuck you, Rico."

At this point the boss fight begins. Get ready to grapple your way to cover, because Miller has a RG-PBA 9 Railgun, which charges unusually fast and critically wounds you if three consecutive charges from the railgun all connect. If you die, you can restart from this point. Also notice that Miller has a health bar at the top of the screen.

Miller himself will grapple around and use the same tactics as normal grappler-equipped agents. He may do any of the following tricks:

The ship also has normal agents spawning on it and six weapon crates around the ship.

It is possible to ambush Miller around a corner, but he's quite tough. A single whole magazine worth of headshots from a SW9 Assault Rifle only does about 10% damage to him.

Headshots with the Yellowstone Auto Sniper are very effective, as well as using its secondary fire drones to draw Miller's fire.

Throughout the fight, Miller and Rico will taunt each other: "You're getting too old for this."

Rico: "Barely breaking a sweat."
Miller:"You should've gone dark. Retired on a beach somewhere."
Rico: "Tried. It wasn't for me."
Miller: "You can't beat The Agency, Rico. The Agency is America. It's not some banana republic. You're not equipped for it."
Rico: "It's not the Agency you should be worried about right now."
Rico: "Just give up. Save us some time."
Miller: "I don't lose, Rico."
Rico: "You getting tired?"
Miller: "Not on your life, old man."

After whittling his health down to zero, a cut-scene begins.

Miller falls to the ground and his glasses fall off. Rico reports about it to Tom, who asks Rico to say a few words. Rico: "He talked too much."

Rico then gets the briefcase, logs in with Miller's fingerprints and starts deleting tracker data. Many of the files he's deleting are pictures of himself, implying that he deleted more than just tracker data about himself.

He then states that Miller was right, that it's not over as he looks over his shoulder at the sky where a small star sparkles. It's a satellite. Tom tells him that it is for now.

The cut-scene continues to show lines on a world map as an unseen man and woman discuss the situation.

Woman: "Miller's dead."
Man: "(sighs) Unfortunate. Miller was a good agent."
Woman: "I told you he was no match for Rico. But he fulfilled his role as a distraction."
Man: "And what about Rodriguez?"
Woman: "Killing Rico was a long shot. Miller was the only one who believed he could actually do it. The primary objective was a success. I was able to recover more than enough data to rebuild Project Illapa at a friendlier site."

The map has by now rotated to show the United States where the lines are ending at the north-east area where a large Agency logo appears.

The helicopter spawns at the mission trigger area right after the opening cut-scene.

Closeup of a weak spot.

Shoot at these "conduits".

All the missiles are being launched.

The missile hall is now full of smoke.

Miller is escaping after his submarine explodes.

Other agents and Miller's hovercraft missiles are trying to stop Rico.

Miller reaches his backup ship. It's one of the Agency cruisers.

Miller refuses to hand over his briefcase.

The boss fight begins. If Rico dies during the fight, you can respawn here. 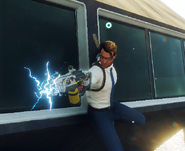 In this rare situation Miller has gotten stuck. He freed himself soon after the picture was taken.

Miller thinks Rico should have retired. Possibly at Medici.

Big reveal about a new Project Illapa being constructed in the United States.

Area after the mission.

Wreckage of the USS Statesman. 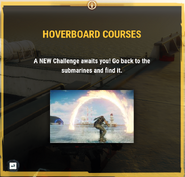 "Tightrope Course" at the wreckage.
Add a photo to this gallery