The Rowlinson K22 is a helicopter in Just Cause 2.

The helicopter is small and has two seats. It is based on the real life Robinson R22, hence the similarities in the names and appearance.

It spawns in five different colors:

It has the shortest take-off time of all the helicopters in the game and when upgraded to 6 stars in the Black Market, it is also the fastest.

"Tested it by flying from a building and then turn back after 2 km. Started the timer at top speed and 1 km further stopped the timer. Did it 3 times. So I'm pretty sure. (195.9 km/h is the average of the three tests)." -- User:Flexo013

However, the speed comes at the cost of being the most fragile helicopter in the game. If the rotors hit any surface or building, the helicopter will rapidly start smoking and a single crash against a building, even at low speeds, or a very hard landing, may cause the Rowlinson to catch flames, forcing you to abandon it. Damage to the helicopter can point one MG to a different angle, making it impossible to aim them both at the same target.

When fully upgraded it becomes as good, if not better, than the proper attack helicopters in the game as it becomes very fast and maneuverable. So much that its low armor doesn't matter because it can evade fire very easily. This doesn't apply when attacking other vehicles.

This vehicle should be the first vehicle that you max out the upgrades on. Once you do it becomes a very cheap yet incredibly capable workhorse vehicle, useful in a rather astounding number of situations. When maxed out:

Basically, at level 6, it is maneuverable enough to take on just about anything the Panau Military throws at you.

Initially, this helicopter doesn't have any form of armaments prior to being upgraded. This Changes when it's upgraded to 6 stars in the Black Market; it has two machine guns fitted in the nose under the cockpit. These machine guns are not as powerful as the Miniguns on regular patrol choppers, having around the firepower of Machine Guns. However, the fact that they are both located in the nose of the chopper makes aiming them easier, and thus makes them very accurate, especially in dogfights, where the K22 can engage and shoot down other helicopters with ease.

Note, however, that if you are "strafing" sideways and circling around a target (like another helicopter) the machine guns do have a tendency to widen their fire, shooting in two slightly different directions so you may only be able to get the shots from one of them onto the target.

The guns get pointed at different directions when the front of the helicopter is damaged.

Upgrading the Agency version will improve them all, except for the red versions found at the Mile High Club ground base, which are always unarmed.

One Deadly Sin provides one with machine guns if you haven't upgraded your Agency version.

Unless specified below, all of these will have machine guns at BM level 6, but unfortunately they will also all be red-marked (meaning heat if seen in them).

All of these are green marked, but only the one for Chemical Heist won't have machine guns at BM level 6.

In the mission One Deadly Sin.

At the Mile High Club ground base.

On the wing of the largest aircraft in the game, the Bering I-86DP.

The Robinson R22, the real life counterpart of this vehicle. 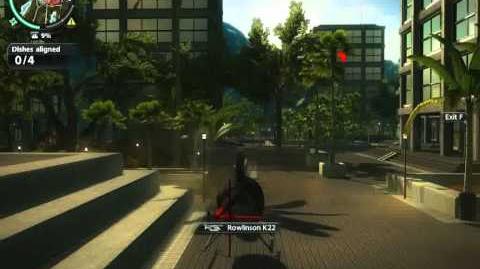