Satcom Dishes are large destructible objects in Just Cause 3.

These are huge satellite communications dishes with a diameter of 90m. They can be found in all three radar bases (Vigilator Nord, Vigilator Sud and Puncta Sud). Some are located in deep valleys like Espia Alta or Espia Bassa, or in mountain bases like Falco Maxime: Centcom. They are also known to move slightly and have little buildings next to the hinges that the dish rests on.

They are used for keeping an eye on rebel activity, as the description for Vigilator Nord says: "The inefficacy of the rebellion in Insula Fonte is owed mainly to Vigilator Nord's diligent eavesdropping. The massive dish and spires maintain watch over the entire northern island of Insula Fonte.".

They also play a role in the Medici Space Program, as mentioned by Espia Alta's description: "Sister base to Espia Bassa, Alta's location was long known as a hotspot for unexplained aerial sightings before the General decided to establish a military facility there. Could there be a link between the area's mysterious history and its giant satcom dish?"

By name they are satellite communications dishes, which would make them a type of Satellite dishes in Medici, however, that task does not really require an antenna of this size. By appearance, they resemble radio telescopes.

As in Puncta Sud's and Le Tutor's description, these giant dishes may also have to do with monitoring black market transactions and monitoring neighboring countries to Medici.

The most convenient way to destroy one is with a few explosive charges placed in the middle of the dish, it will instantly destroy the dish. Make sure to get off of it before detonating the dish. An M488 can destroy this in one rocket, however it's not unlocked until the second to last mission.

As one of the largest destructibles in the game, it is fitting that it gives 800 chaos points upon destruction.

Some larger bases throughout Medici contain them:

The eDEN Corporation also had at least 1: 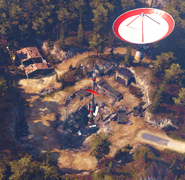 At eDEN Station: The Spider.
Community content is available under CC-BY-SA unless otherwise noted.
Advertisement