The San Esperito Military is an armed group in Just Cause (1).

They are the official armed forces of the Republic of San Esperito.

Other than the above duties, the military is deployed whenever the San Esperito Police Department is no longer able to control the situation.

The official color of the military is grey, but some vehicles are painted with a combination of different greys and white.

See the heat article for when they show up and what weapons they use at what level.

The San Esperito Military is mostly made up of volunteers, as proven by Jose Durango's call for young people to join the military. Based on the quote, it's also possible to speculate that the armed forces of San Esperito accept volunteers from both genders, but one can never see any female solders in the game.

Quote from the game manual:

"General Jose Durango has criticised the young people of San Esperito for not taking control of their lives. Their presence on the streets and beaches is largely down to a lack of alternatives. "I would attempt to identify some of the fundamental problems faced by young people today and suggest possible solutions to these problems". He went on to say, "Perhaps the most fundamental problem faced by young people today is unemployment. I believe that young people need role models, discipline and morals instilled into them. The kind you get through military training."

In politically unstable provinces they can sometimes be seen machine gunning civilians, but in stable ones the San Esperito Military is actually somewhat benevolent with its arms fair charity and there is no obvious oppression of Civilians, as opposed to the Panau Military, which constantly oppresses its own people at road Checkpoints. Oddly, even when the military is shooting at civilians, Rico will get heat level 1 if he should hit someone's vehicle with his car.

In Guerrilla stable provinces, the military change from appearing very commonly to appearing rarely. However they can still spawn in heat and in side missions.

Branches of the military

The San Esperito Military is consisted of 3 branches. The army; the airforce and the navy.

The San Esperito Military owns 26 bases that are available to be taken over by Rico and the Guerrillas, but they also control several other facilities, such as:

Almost all bases have at least one automatic surface to air missile launcher and provide some kind of a vehicle.

San Esperito hosts an annual international arms fair. The second time the event was held (2005), it was done at the Mendoza International Airport. This takes place in the mission Some Enchanted Evening.

The event is used to sell weapons to international buyers. As reported by the Gaceta Nacional del San Esperito, the profit goes to charity.

There are several hand weapons and even San Esperito army Ballard series armoured vehicles on display at the event.

Other than the above armed vehicles, the San Esperito military uses several types of hand held weapons. During the first half of the game, the soldiers can be seen using lighter weapons like the Adler FF M-72 and the Aviv Panthera, but later the Fleisher AR-5 Blizzard will become the standard army gun. During Liberations, sidemissions and other odd events, they can also be seen using rocket-launchers.

Sometimes there may be army snipers on the roofs of some village houses. They seem to disappear during a liberation.

During the events of the game, the military also obtains nuclear weapons. For more info on that, see: Nuclear missiles; Love is in the Air; Sink the Buccaneer and Taking Out The Garbage.

Members of the Army in the San Esperito Military. These weapons are Adler FF M-72 (left) and Aviv Panthera (right).

A pilot NPC that can appear flying some helicopters, such as the pictured HH-22 Savior. This NPC model is also used for the Agency pilots, and can rarely also be seen with the Black Hand.

A San Esperito Military veteran model, wielding the Fleisher AR-5 Blizzard. The vehicle in the background is an MV.

Vehicles exclusive to the Storyline Missions

A Cutler Bullhorn that is exclusive to the mission Devil's Drop Zone.

A Fusilier Commander that is exclusive to the mission Some Like it Hotter.

A Huerta PA51 Aztek which appears in 2 missions only: Sink the Buccaneer and Taking Out The Garbage.

A Whiptail Gyrocopter that is exclusive to the mission Guadalicano Choo Choo. 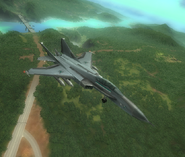 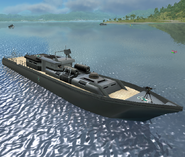 A row of military tents at the Los Islas Defense HQ. Likely used as living quarters for lower-ranked soldiers.

A pair of barracks at the Octava Military Camp.

An angled barrack at the Octava Military Camp.

A garage with a Ballard M5B1 Scout at the Octava Military Camp.

Inside view of the garage.

A ground-level helipad, housing a Walker AH-16 Hammerbolt. This picture was taken at the La Perla Military Base.

A raised helipad without a helicopter. This picture was taken at the Octava Military Camp.

Both San Esperito Military banners. The one on the right is the Liberation banner, and the other two are standard banners that appear elsewhere. This picture was taken at the Los Islas Defense HQ.

A San Esperito Military guard house, usually found at the front gate of every military base. This one is at the Osvaldo Guzman Military Base.

A Guard tower at the Octava Military Camp.

SAM launcher at a military base.

SAM launcher on a tower. These large towers provide a high, commanding view of the surrounding area for SAM sites to easily fire missiles at targets.

A large Communications Mast. These large towers can be found all over San Esperito, but some are inside military bases. This picture was taken at the Los Islas Defense HQ. 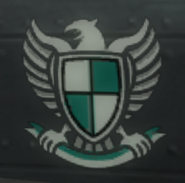 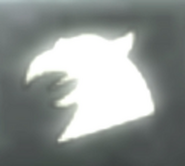 A smaller version of the stripe that appears on soldier's helmets.

Landed San Esperito Military and Agency versions of the Jackson JC - 2 Alamo on a Triton Broadsider.

Some San Esperito Military troops and vehicles at the supposed medical facility featured in the mission Love is in the Air.

A Triton Broadsider and her crew outside Rioja 06 Pirates Cove.

A small unmarked military base in Provincia Aguilar.

The largest ship in the fleet, this destroyer only appears once in the mission Sink the Buccaneer.

Rear view of the destroyer. Note the helipad on the rear deck.

Side view of the destroyer.

There are two army snipers on the roof of the highest house. It's a coastal town with a nearby safehouse at Provincia de Castillo.
Community content is available under CC-BY-SA unless otherwise noted.
Advertisement