The San Esperito Police Department, also known as the Policía is one of the armed groups in Just Cause (1).

They are the official police of the Republic of San Esperito. Their duty is to enforce the law.

"Halt, citizen! This is the police." - One of their most memorable quotes.

The game never gives a civilian any Heat level, so if there's a traffic accident between a police car and a civilian car, both drivers will get out and perform the same standard upset hand gesture. However if Rico should happen to scratch a civilian vehicle near them, it can trigger Heat 1, meaning that they'll try to kill Rico, but call no reinforcements, so it's easy to get away.

If the policía feels that they can't stop you and you continue to break the law, then they'll call the San Esperito Military, who will take over for them - heat 4 and 5. Depending on how far you are in the storyline, you might also run into foreign security specialists, the Black Hand.

During the mission Good Cop, Bad Cop it's explained that the San Esperito Police Department is loyal to the government, though they are also corrput and can be bribed.

Until the events of that mission, the San Esperito Police Department is run by chief Velasco. After his death, the next chief of police is Carmona, who gets mutilated (and possibly also killed) at the end of the mission Dismissed Without Honors.

Tom Sheldon explains at the beginning of the mission Streets of Fire that the police is on a "permanent vacation". However, the cops are a permanent presence in the game.

According to Kane (during the mission Dismissed Without Honors), the "Secret Police headquarters" is located in Esperito City, in the same building as a Prison. The mission objective sentence (on screen) and Inmaculada both call it a prison, but it could be both.

Many rural villages have police stations. These stations are all identical cube-shaped buildings, painted in a combination of white and green. They don't have constant police presence and normally appear as completely usual houses.

It's possible to blow up the station buildings during Liberation sidemissions. To do that, you have to cause any explosion in the immediate vicinity of the building. The building explosion does not harm Rico. Destroyed buildings stay destroyed for the liberation only and briefly afterwards, and will otherwise appear standing . The explosion adds a negligible bonus to the liberation progress bar, the same way as drug and ammunition explosions during Cartel Villa takeover.

The San Esperito Police Department has many different vehicles: 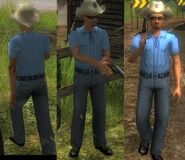 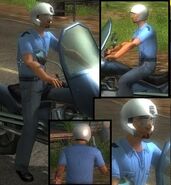 Police officers who are seen during Liberations. The larger officer at the lower right corner is using a Moretti CCW Praetorian shotgun.

The SWAT units that are used by the San Esperito Police Department in high government Heat during Liberations.
Add a photo to this gallery

A Vaultier ALEV Patrol Special, used by the SWAT in Liberations, and during government heat.

A Vaultier Sedan Patrol Compact at the Rioja 07 Motor City safehouse.
Add a photo to this gallery 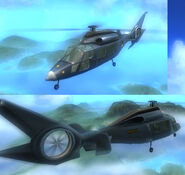 A Huerta PA51 Aztek.
Add a photo to this gallery

A Pequod - Harpoon PC 350.
Add a photo to this gallery

Vehicles exclusive to Missions or SidemissionsEdit

An MV. Seen in sidemissions and also obtainable through the mission Dismissed Without Honors. 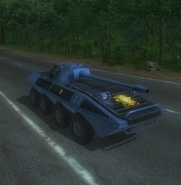 A Delta 5H4 Boxhead. Seen once in the mission Good Cop, Bad Cop.

A Jackson Z-19 Skreemer.
Add a photo to this gallery 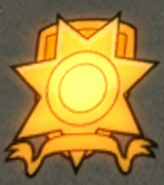 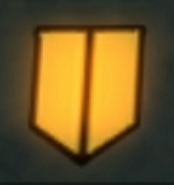 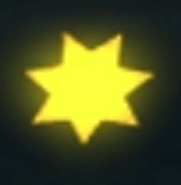 A police station, as seen in villages all throughout San Esperito before the liberation of the settlements.

A police station after the liberation of the settlements, notice the bandalized poster.

The Secret Police headquarters.
Add a photo to this gallery

The patrol vehicles of three factions involved in a shootout, Wallys GP of the Guerrillas (left), Huerta Mesa of the police (center), and Chevalier Street Bird De Luxe of the Riojas (right).

A police officer driving a Guerrilla version of the Wallys GP patrol vehicle and shooting at the same time.

A police officer driving a Montano version of Cutler-Randall Conquistador.
Add a photo to this gallery
Retrieved from "https://justcause.fandom.com/wiki/San_Esperito_Police_Department?oldid=156775"
Community content is available under CC-BY-SA unless otherwise noted.