The Senjakala Islands are an administrative unit in Just Cause 2.

They're characterised by a jungle delta and a number of large offshore islands. Notably, one of these islands hosts the Three Kings Hotel. Its name is Malayian for "Twilight" Islands.

For the sake of this page, however, "Senjakala Islands" refers the areas within the Ular Boys faction influence.

There are no airports in the geographical Senjakala Islands.

Pekan Batu Karang, one resort in the area. 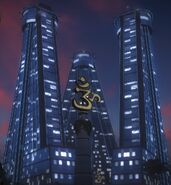 Three Kings Hotel, the massive hotel located in the area.

Kem General Abidin, a large military base in the area.

Parts of Pulau Kenjantanan.
Add a photo to this gallery

Retrieved from "https://justcause.fandom.com/wiki/Senjakala_Islands?oldid=121538"
Community content is available under CC-BY-SA unless otherwise noted.