The Shimizu Tumbleweed is a pick-up type car in Just Cause (1).

It's a pick-up type car, based on the 1992-1996 Ford F-150. Some varriants are technicals armed with a mounted gun, which adds great firepower though they need another operator.

The Tumbleweed is faster than the average car and stable at high speed, even when being rammed. It has a good suspension, giving a smooth ride.

It's no sports car, but it's definitely among the better half of civilian cars.

As a rear wheel drive car with a light looking rear end, it should do well at Drifting, but having good traction, it doesn't seem to want to do that.

Notice the box with "coca"
Add a photo to this gallery 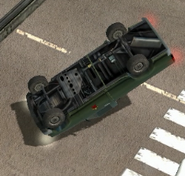 View of the underside parts.

View of the engine.

Notice the box with "Coca"

Notice how it is camouflaged with the grass.

One at the end of a race.
Add a photo to this gallery

A red color one in Esperito City.

Stunt position in a civilian version.

A white one doing a Stunt jump in a City.
Add a photo to this gallery

The Guerrilla's three patrol vehicles on land: on the left: Shimizu Tumbleweed, in the middle: Hurst Buckaroo, and on the right: Wallys GP.

Guerrilla version on the left and Montano one on the right.

Civilian version seen in a loading image that explains how to use the Protec Grappler G3, (also see the loading image for Potomac Silverbullet).

Ford Model F-150 Nite, year 1991. This vehicle is the basis for the Shimuzu Tumbleweed.
Add a photo to this gallery
Retrieved from "https://justcause.fandom.com/wiki/Shimizu_Tumbleweed?oldid=157022"
Community content is available under CC-BY-SA unless otherwise noted.