Just Cause Wiki
Register
Don't have an account?
Sign In
Advertisement
in: Articles with quality level 4, Sky Fortress, DLC for JC3,
and 2 more

Sky Fortress is the first downloadable content in the Air, Land & Sea Expansion pack for Just Cause 3.

"Just Cause 3: Sky Fortress is the first PDLC pack from the Air, Land & Sea Expansion Pass. Become the master of the skies with Rico's all new and fully armed, Bavarium Wingsuit. Save Medici from the threat of the terrifying Sky Fortress and its army of deadly robotic drones.

This content pack includes new missions, challenges, the "Bavarium Splitter" assault rifle and a personal defense drone, all of which can be carried over into the main game.

Coming in March 2016, Air, Land and Sea Expansion Pass owners can pick up the Sky Fortress Expansion Pack 7 days early on PlayStation 4, Xbox One, and PC.

A new enemy, the eDEN Corporation, uses the large eDEN Airship and a fleet of armed drones to invade Medici. They are in possession of futuristic technology, such as energy beam weapons. Rico has to defeat them.

This new faction uses specialized drones to mine Bavarium from Medici. Drones are ranged from usual extraction (mining) drones to armed drones, with missiles and machine guns, as well as ground drones with dual miniguns. Similarly, eDEN Corporation soldiers are seen with more advanced weapons and armor than those of Medici Military. Some drones have a Bavarium-shield.

See the Category:Sky Fortress for a list of everything.

How to find and activate the DLC

"1. The first Sky Fortress mission is unlocked after completing the JC 3 mission “A Terrible Reaction”.
2. If you have progressed beyond the mission “A terrible reaction”, Sheldon should contact you regarding a situation and the mission icon for “Suit up” should appear on your map.
3. The original game can be played with your new Bavarium Wingsuit.
4. Wall boost. Reel in to any surface then press and hold the Wingsuit button for a boost jump.
5. Medici S.A.M.s will be able to lock on to your new Wingsuit but missiles can be evaded with a barrel roll.
6. If Rico takes a hit and starts to fall, press the Wingsuit button to do a quick recover.
7. Hold the air brake to perform tight turns.
8. You can boost while holding the air brake to fly straight upwards.
9. About to crash into a wall? Hold the air brake to bounce off it.
10. Evade flak clouds by barrel rolling.
11. Suit up (or down)! Switch at any time between the regular Wingsuit and the Bavarium Wingsuit in the Options menu.
12. Wingsuit skins only work with the default Wingsuit and not the Bavarium Wingsuit.
13. Boost from the ground or the water by pressing and holding the Wingsuit button.
14. Finding the going a bit tough? Play some new Wingsuit challenges and unlock some mods for your new Bavarium Wingsuit."

Front of the EDEN Airship.

Black Hand mercenary working for the EDEN Corporation and a drone with a Bavarium rock.

Rico on his way to the Eden Airship. 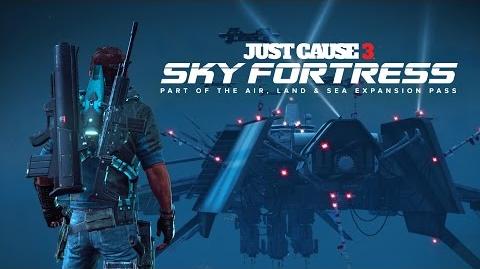 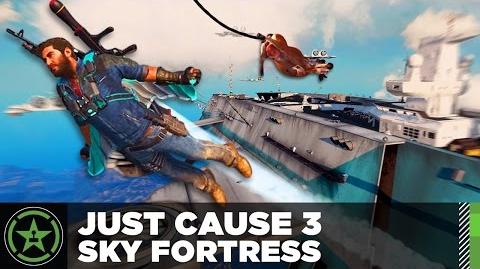