Skydiving is a gameplay feature in the Just Cause game series.

Skydiving is the term used for free falling with arms and legs spread out in order to maintain a balanced and controlled free fall whilst falling from a high altitude. Skydiving can be done as a stunt, to travel down a mountain faster or to simply skydive for fun. A parachute is then used afterwards for the skydiver to land safely by either rolling forward to lose momentum from the free fall or if the parachute is guided upwards but descending slowly the skydiver can just land standing up with no need to roll at all.

Some people get skydiving and BASE jumping mixed up.

Skydiving in Just Cause is the very first feature of gameplay that the player is able to control themselves through the air in the first mission - Devil's Drop Zone. Skydiving is an automated feature that if the player is above ground by a certain height, they will enter free fall and start to skydive. At the smallest free fall heights, not opening the parachute and hitting the ground will either not hurt the player or on the other hand, severely damage the player's health.

The parachute can safeguard the player from hurting themselves as long as they don't hit any tall structures whilst gliding to the ground or the parachute will disappear and the player will fall but not skydive, meaning that if a player was to fall after hitting a skyscraper while the parachute was open, they would fall as if they were falling off a hut or vehicle on the ground but the height would likely kill the player.

Skydiving as stated above can be used for fun, for transport or to try something new, like a stunt. Oddly enough, the player can stunt jump on to a car during free fall without losing health at all. The timing window for this is quite small so this is in need of practice if players want to try this.

Pulling the parachute too close to the ground will not harm the player or make them skid. Instead, they will seem as if they are going up and down very fast before doing a roll.

Again this is the very first feature of gameplay the player can control themselves.

Skydiving in Just Cause 2 has more features added to it than its predecessor. The player can skydive a very high height and can grapple themselves to the ground without hurting their health. The player can also BASE-jump from higher heights now, such as Snow Peak and the blimps that are on top of the Mile High Club. The player can also hurt themselves more. If the player hits an object whilst skydiving, they will violently be either falling or tumbling (hitting a building or down a slope respectively). If the player is still quite high in the sky, unlike JC1, the player will be automatically reset to skydiving but this may take a few seconds.

If the player were to pull the parachute too close to the ground they would skid along flat ground or tumble down a slope a bit less violent and less harmful to the player than not opening the parachute.

The player cannot stunt jump to vehicles now. They must open the parachute first before stunt jumping onto a vehicle. However they can grapple to the vehicle whilst free-falling.

Just Cause 3 also features skydiving. As in the previous games, skydiving is one of the first places where the player controls Rico.

Skydiving has now been heavily downgraded in the sense that Rico now falls nearly vertically with no (or almost no) ability to move forward. This is to make players use the Wingsuit, which has a much lesser rate of decent and much greater forward speed.

As has reportedly been measured and calculated by some player(s), the fastest fall rate in JC3 is 75 m/s, which is also the highest achievable speed for the wingsuit.

JC3 also has a new type of fast descent, called "controlled descent" (or was it "controlled fall"?) which is when Rico falls straight down with out entering the skydiving animation. This is one of the many new things that the game actively measures at all time and lists at the game menu. 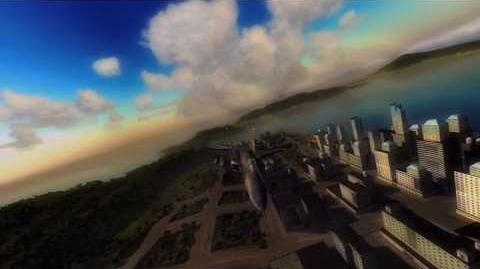 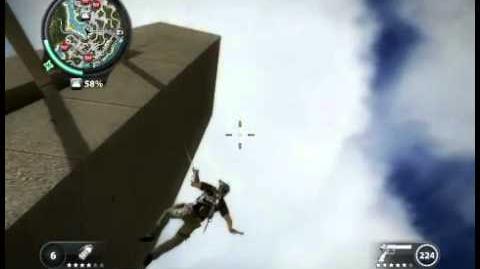