Small destuctibles are a type of small explosive sabotage destructible objects throughout the Just Cause game series.

They're all un-named by the games themselves and they all explode when damaged. They are distinguished from destructable scenery by them providing Chaos points upon destruction. Some of them respawn if you leave the area and return and others do not. Most of them can be found at Military bases. Some, like the red barrels, fertilizer barrels and white civilian satellites can also be found at civilian settlements and facilities.

The Bavarium Wingsuit's homing missiles will lock on to most of these objects.

The only type of small destuctibles in this game are Red Barrels, which appear in every Just Cause game.

The white gas tanks have a red stripe in the middle. They're among the rarest such items.

They stand on one end and when shot, fly straight up for at least 100 meters before exploding. If you're fast enough, it's possible to Grapple onto one, to fly up along with it. But be sure to jump off before it explodes.

The red gas tanks are always stored horizontally, 3 at a time in a frame that could contain 6. They get damaged when shot at and/or when there's an explosion close to them. When damaged they fly away horizontally. But unlike the white gas tanks, they don't fly in a straight line and it's difficult to Grapple onto them.

These appear in every Just Cause game.

They appear in Just Cause 2.

These are the rarest such objects.

They're 4 big grey missiles, stored horizontally in a wooden frame.

They're much too big to be helicopter missiles, unless a helicopter would be expected to carry only two of them at a time. They might be meant for some type of heavy multiple rocket launcher that does not exist in the game. They look similar to the white missiles that are launched from the U1 submarine during the mission Mountain Rescue.

When damaged they explode with a pretty powerful force, so stay at least 10 meters away.

Barrels of fertilizer are blue barrels similar to Red Barrels but with a pole on top. On top of the pole is a small plastic jug. A small tube connects the jug to a pressure gauge mounted to the pole. This is likely for mixing chemicals to create the fertilizer. The barrels can be destroyed with four shots from a fully upgraded Pistol. The explosion has a range of about 3 to 5 meters. Upon destruction they each provide 10 Chaos points.

The barrels are useful during the mission The Red or the Blue One?, where many enemies are around these barrels.

Locations: They are located next to plants at the Roaches drug refineries which are involved in the faction mission The Red or the Blue One?. There's a total of 4 refineries, all on the roofs of buildings in the Panau City docks district.

These appear in every Just Cause game and for the record many others.

There's three types of gas tanks in Just Cause 3:

They're grey, but quite rusty. These barrels are usually (or always) stored horizontally on wooden frames and they each have a hose coming out of them. When damaged, they burn for a few seconds and then explode. They're all marked with a red stripe, so they may be seen as a type of the more common Red Barrels.

These barrels can be found at some police stations.

There are two types of red ammunition crates at Military bases in Medici and some Roadblocks and checkpoints.

These explode with multiple small explosions.

The smaller kind are usually in piles of 5 crates and the larger crates are in piles of two. They respawn once the game is restarted.

It's not known what these contain, or how these are suppose to be used, but they can be found at Bavarium mines and some police stations.

They're grey canisters with a wide red stripe. A canister is about 1.5 meters tall and has an about 40x40 cm square base. They are assumed to have something to do with bavarium, because when they explode, the explosion is unusually blue and shoots out some lighting.

These are completely red and explode very easily, producing a small fireball. Identical, but separately indestructable canisters are mounted onto many military vehicles in the Just Cause game series as well as reality.

Fireworks always appear when a settlement is liberated and they can sometimes be found in Military bases in Medici and in Military Outposts. They are very similar to Red barrels, as they will explode on impact with a weapon. Picture of these is needed.

These can usually be found in most large cities and towns on the sides of buildings. Most are white with a light blue triangle on the dish.

JC2 - White gas tank stunt animation. It may take a few seconds for the animation to load.

JC2 - Both types of Gas Tanks on an offshore rig.

JC2 - The missiles on the helicopter landing pad at Kem Jurang Gurun.

JC2 - Barrels of fertilizer at a Roaches drug penthouse.

This is a transformer that can be destroyed in Bandar Baru Indah. 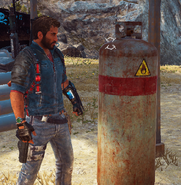 JC3 - Canisters of some kind of Bavarium product.

JC3 - The smallest gas tanks near some fuel canisters.

JC4 - Fish vendor trailer.
Add a photo to this gallery
Retrieved from "https://justcause.fandom.com/wiki/Small_Destructibles?oldid=162153"
Community content is available under CC-BY-SA unless otherwise noted.