Solís (pronounced "So - leese", often misspelled Solis) is the fictional country in which Just Cause 4 takes place.

More info will be provided as soon as it is available, but right now, it is known as the home of the Black Hand.

The map has been officially stated to be 1024 km2, which makes it the same size as San Esperito, however it's said to be the biggest JC map so far by having more usable dry land than the previous maps.

The nation is ruled by Oscar Espinosa, who owns all the major companies in the country. He has replaced the former military of the nation with his private security company, the Black Hand. The Black Hand are used in the duties of the military and the police. The nation doesn't seem to have any court system either, as it's mentioned in the mission Mazmorra Rescue that the Black Hand can imprison people with out any oversight.

The capital is Nueva Voz, a city on the southern coast. There is also a city called Quya on the east coast. Quya is described as "Home to the free-spirited, free-thinking people of Solís."

Apparently the demonym for the people of Solís is "Solinos", not "Solisians" (although an easter egg says otherwise).

It is mentioned by Javi Huerta that the Espinosa Dynasty has maintained power through rigged elections, however outside of this mention, there is no indication of anything resembling democracy. Instead, the nation seems to be a dictatorship with a strong military-industrial complex.

The ruler of the nation is Oscar Espinosa, who's only claim to power seems to be the fact that he owns the Prospero Group (a corporation that owns all the major factories in the country) and several other large companies. He is also the son of the previous leader, Leon Espinosa, who was the previous head of all the major companies. They are both descended from Diego Espinosa, a Spanish conquistador who conquered Solís 500 years ago and set up a military dictatorship. So de facto the nation has hereditary monarchy with a monopolized plutocracy. It is however never mentioned what the formal title of the head of state might be.

According to one of the games loading screens: "Over 60% of Solís is employed by an Espinosa company or subsidiary -- this includes the Black Hand and every single politician in elected office." This establishes that elections are being held and there are politicians, but they are on the rulers payroll. It either means that the politicians are puppets who are controlled through corruption, or that Solís has a system of government where the monarch employs the lower-level elected officials. In case of the first one, the Espinosa Dynasty are oligarchs who have complete control of the economy by having used capitalism to out-compete everyone and who bribe every democratically elected government. And in case of the second, they are legit monarchs, similar to pre-revolution France, where there was no meaningful difference between the state treasury and the monarchs personal wallet.

Leon Espinosa may have held power through rigged elections, but as explained by the Solís Hoy radio, it was Oscar who turned the Black Hand from a "bunch of local badasses" into the world's most advanced private military. Santiago, one of the radio hosts, reveals that the Black Hand used to have popular support of the people, but in more recent times, they've started wearing masks even when serving domestically and that the nation has become disturbingly authoritarian with dissenters being arrested at night and imprisoned at La Mazmorra. Examples of arrests and assassinations being carried out with out question on dictatorial command are spoken of in the missions Agency Distress Beacon, Mazmorra Rescue and Meeting Lanza Moralez. As mentioned by Diago, one of the radio hosts, the nation does have a system of laws and nobody who obeys those should worry about the Black Hand.

Initially the people (callers on the radio) seem to be relatively approving and initially even happy to live in what they believe to be the "best country on Earth", but as the storyline progresses, they become more daring to express their discontent with the authoritarian rule. Even when they do question the government and the feasibility of resistance (Army of Chaos), they agree that it would be suicide, because of the Black Hand's reputation.

To avoid spoilers, see the Solís Hoy article for reports of what happens after the missions.

As discovered by Javi Huerta, the indigenous people of Solís were more technologically advanced than was previously believed. They constructed many sets of machinery that remain functional until modern time. These machines power the moving parts of large stone statues. Also, the necropolis at Isla De Los Annilos has large moving parts.

Solís has lots of ancient tombs and other structures. One of them, featured in one of the earlier missions, is an at least 600 year old aqueduct.

Solís has at least 2 different unique cultures. These were the Qacha and the Ipa (or Aipa). These people had a common monarch. The last ancient ruler was called Otorongo.

Solís was then invaded by the Spanish conquistadors, lead by an Diego Espinosa. Solís is currently ruled by a man called Oscar Espinosa, a descendant of the conquistador.

Apparently the members of the Otorongo royal family had been executed for "countless murders", but Javi believes that the truth is more complicated. In fact, there was a civil war between the local peoples and the local peoples, where the Spanish backed the Qacha people. Eventually it's revealed that the war had been purposely started by Diego, who used it to eliminate the existing government and then set himself up as a ruler of Solís, thus starting the Espinosa Dynasty.

At some point in modern times, the Espinosa regime created the Black Hand as the military of Solís. The distinction however is that the Black Hand are directly owned by Oscar Espinosa, who finances them.

To avoid needless spoilers here (a location page), see the mission articles and Solís Hoy (radio channel) for info about the present and future.

The Downloadable content for Just Cause 4 adds missions and content that focuses on racing and gangs, something to do with demons and finally about the Agency. These events are set after the storyline missions, but it's unknown if any of them will become unlocked closer to the beginning of the storyline, similar to how Downloadable content for Just Cause 3 becomes unlocked near the beginning.

The old Otorongo-era religion seems to have been all about ancestor worship, because all the ruins from that era are tombs. Some sites look like they could have been small towns, but really they are all tombs.

Because Solís was taken over by conquistadors from Spain (lead by Diego el Santo), it's reasonable to assume that they made Catholicism the main religion, but the stone churches have no recognizable religious symbols on them and there are no religious civilians (such as priests) anywhere.

It was stated in one of the game's earlier promotional videos (which one?) that if you live in Solís, you are either training to become a soldier, or you are working at a factory. This would obviously be a bit of an exaggeration, but it suggests that Solís is heavily industrialized and has a "military first"-policy, similar to North Korea.

Much (if not most) of the nation's economy is built on militarized factories that produce military equipment for the Black Hand. These might be paid for/funded by dictators who hire the Black Hand. Prospero Balística is said to export weapons to "over 100 nations".

More domestically, the Black Hand are mentioned by Sargento to have taken over formerly civilian industrial locations like the Muro Fortaleza hydro-electrical power plant to provide more power and resources to Project Illapa. This project is Solís' priority #1 during the events of Just Cause 4. Officially (as told to the civilians), the project is meant to construct a weather controlling machine that would end all extreme weather, such as tornadoes, sandstorms, lightning storms and snow storms, thus preventing natural disasters. Really though, the machine is meant to create, control and weaponize these storms.

The radio Solís Hoy reveals more about the economy. All the major companies apparently belong to the Oscar Espinosa. A female caller explains that she's proud to work 70 hours per week to live in the best country in the world. The radio hosts also mentions that they can buy whatever they want for an honest day's work.

According to one of the games loading screens: "Over 60% of Solís is employed by an Espinosa company or subsidiary -- this includes the Black Hand and every single politician in elected office."

Some civilian women may talk to each other and complain that there's only 2 clothing companies available (both belonging to Oscar), which has lead to a limited selection of clothing.

Having few lakes and rivers, Solís relies more on its roads and railroads than any of the previously featured nations. Solís is also known to have a few airports, with two large international airports. There is also a big highway seen in the grasslands.

Solís has 4 climate zones (jungle, desert, grassland & mountains), similar to Panau and each of those is said to have 2 to 4 distinct sub-areas that define the cross-overs zones between the main areas.

According to a developer video, the highest natural point in Solís is 2461 meters above sea level.

One location in the desert area has a giant smoking crater. It was caused by some type of large space-rock having fallen there.

The Black Hand have control of the weather, as they are known to create controlled tornadoes. The dynamic weather also has other types of storms for other biomes. The grasslands biome has tornadoes; the alpine biome has blizzards; the rain forest biome has thunderstorms; and the desert biome will have sandstorms.

Natural weather will be completely functional for the first time, not just in the different storms. Rivers will have currents and the atmosphere will have winds. These effect the handling of boats, the wingsuit and possibly other aircraft.

Straight, but lower resolution version of the flag.

Another version of the flag file. The tricolor has been painted over with editing software.

The latest map of Solís including some points of interest. 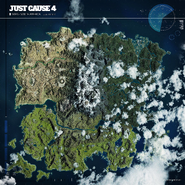 According to a developer video, this map was purposely made to lack many settlements and other possible spoilers.

A jungle with a settlement with modern high rise buildings and a waterfall.

Mssive waterfall and some Mayan-style ruins.

El Abismo - village on a bridge.

A town in the grasslands.

Village along with a Whaleshark-like boat.

A sandstorm in the desert.

A tornado is destroying a settlement.

First shot of the game world in the first trailer.

A town being devastated by a tornado.

The city of Nueva Voz, the capital of Solís.

City of Quya. The picture was initially (possibly by mistake) associated with Nueva Voz, the capital of Solís.

Quya from the coastal side.

The giant crater in the desert.

Similarly to Medici, that has several small football fields with an interactable ball, Solísians are also into football and have a stadium for it.

As seen in the "Eye of the storm" trailer.

Another bridge settlement in the "Eye of the storm" trailer.

Rico admires nature in the 25 minute no HUD gameplay video.

Sandstorms are common in the deserts here.

Locations of San Esperito and Solís. The location of Solís was revealed in the mission Rogue Agent. 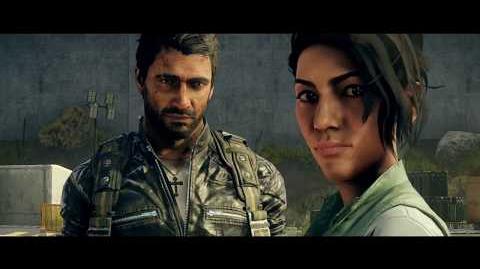 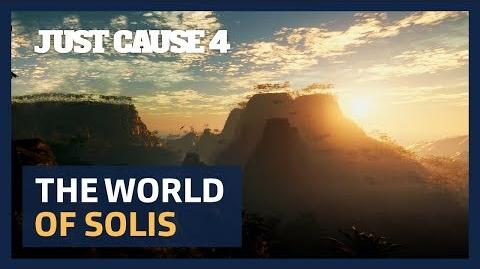 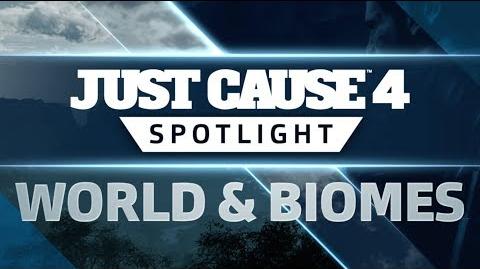