The Squire Synco is a car in Just Cause (1).

It's one of the two small British hatchbacks in San Esperito (the other being the Baxter Petit) and as one might expect, it's a rather standard vehicle.

It's not going to make Rico look any cooler as he drives down the road, but at least it beats walking.

It has a relatively large cargo compartment, but it still has an additional frame on the roof for even more stuff.

This car has below average speed and handling and it's very difficult to control on steep surfaces. It's not advised to use this as a get-away vehicle, as the San Esperito Police Department will have exceedingly fast vehicles and the durability of the Synco is very poor. However, it can make some quick maneuvers when on the flat town/city streets.

It's not advised to use it in settlements where there's a chance of being attacked by enemy forces.

Rico being driven around Merecure village by a civilian man. 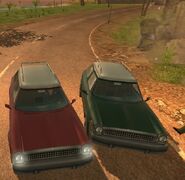 A Spanish language loading image that explains the Stunt position, the other vehicle use for this purpose is Potomac Silverbullet, also see the loading image for Shimizu Tumbleweed.

Real cars used as design basis.
Add a photo to this gallery

Retrieved from "https://justcause.fandom.com/wiki/Squire_Synco?oldid=146517"
Community content is available under CC-BY-SA unless otherwise noted.