The Stinger GP is an armed buggy in Just Cause (1).

It looks like and is based on the Desert Patrol Vehicle.

It has a typical dune buggy appearance, featuring two front seats, freelaid wheels and a streamlined body with no windows. It has the capability of carrying an extra third passenger / Mounted Gun operator on the rear platform. If used during a "liberation" sidemission, it's likely that one of the Guerrillas / Riojas will jump on and use the mounted gun.

It's a fast off-road vehicle and has 4-wheel drive. It's among the best off road vehicle in the game. It's good with Stunt ramps. It's one of the vehicles that can drive at least half way up on top of a civilian vehicle. The main disadvantage is the relatively heavy damage it takes, when landing at a wrong angle. The metal panel at the front, which helps it to slide on to and over obstacles, is usually the first thing to break off.

The Mounted Gun can only be used by a passenger on the rear platform. This is most often seen during liberations.

Interior view and engine texture.
Add a photo to this gallery

Underwater, view of the underside parts.
Add a photo to this gallery 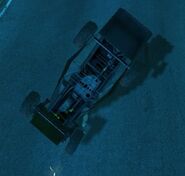 View of the underside parts.
Add a photo to this gallery

At the Costa Brava military base. In the background is a San Esperito Military Ballard Sentry STRL - 14.

In the background. The Black Hand soldier is wielding an Adler FF M-72.

Purple civilian (not Montano) version at Villa La Cantera.
Add a photo to this gallery
Retrieved from "https://justcause.fandom.com/wiki/Stinger_GP?oldid=146624"
Community content is available under CC-BY-SA unless otherwise noted.