Stunts and challenges are a type of sidemissions in Just Cause 4.

Not to be confused with improvised stunts.

Stunts (see improvised stunts) have always been a major part of the Just Cause game series. As of JC4 they are actually needed for settlement completion. Previously we needed liberations for this.

While most of them are easy enough, some of them require careful timing. And in some cases, some are unavailable until a vehicle is unlocked in supply drop.

In these stunts the required vehicle is always parked nearby, even if the stunt is located in complete wilderness. Normally the vehicle is with in 100 meters.

These can normally be done with any vehicle. The speed ranges from about 60 to 300 km/h.

The displayed speed seems to depend on the used vehicle. 100 km/h could also say 53 knots if the player is using in a boat.

These require the player to fly the wingsuit through 3 rings with in a limited amount of time. Most of these are very easy if the player starts at an obvious nearby cliff where the first ring is located.

The "first" ring is marked differently, but it's possible to complete these stunts in any order of rings. It's also OK to switch to the parachute, or even land in between the rings, if necessary.

These stunts unlock upgrades for the weaponized and rocket-powered wingsuit:

The Danger Rising expansion pack adds a hoverboard and stunt courses for it. Once the last mission Rogue Agent is complete there will be 1 track at each of the submarines. Later there will be additional longer ones that start in the mountains.

JC4 is getting new additional stunts each month for at least 6 months.

These can be seen with the AR scan, but have to be activated on the map first. They are a special set of additional stunts that may be found all over Solís. They are distinguished by their purple icons. These are stunts of all types and are significantly more difficult to complete.

There are 12 large colorful skulls hidden throughout the map. (See the map below.) They're actually easy enough to find because the game points them out with the aid of small stunt markers at the top left of the screen.

Once destroyed, the release some confetti and fireworks and completing them all rewards the player with an additional optional wingsuit and parachute skin.

Use the airlifter mods of the grappler to send 10 examples of specific animal species flying.

These are random gameplay things that the game constantly tracks. They can be seen in the games pause menu, next to the map and supply drop.

Players can see their own score there and the cores of their "friends" from the Steam friends list, or equivalent console sites. As of 2019.10.04 three of these scores were updated to show the high scores of Alexis from the games development team. Beating all the scores by Alexis rewards the player with an additional parachute skin. A similar set of 3 high scores was set in november 2019 by someone named David.

Wingsuit stunt above the Ojo de la Pradera cable cars. This stunt requires the player to either skillfully grapple the cable cars for additional speed, or use the rocket-powered wingsuit. Also note that as indicated by the HUD, this stunt will unlock the third rocket boost for the player by being the 30th stunt.

As seen in the game menu, at the "challenges" tab.

Challenges ("feats") by Alexis were announced over social media.

Monthly challenges as of october 2019. 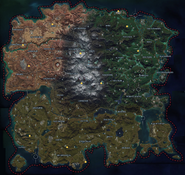 Blowing up a Dia de Muertos skull with SS Borracho gunfire.
Add a photo to this gallery
Retrieved from "https://justcause.fandom.com/wiki/Stunts_and_challenges_in_JC4?oldid=158092"
Community content is available under CC-BY-SA unless otherwise noted.