Taming the Beast is a Reapers mission in Just Cause 2.

Rico is assigned to the task of obtaining firepower for the Reapers in the form of a Panau Military armored car, a GV-104 Razorback. These things don't grow on trees, but fortunately there is one in a nearby base. Rico's mission is to steal and deliver the armored car.

You are provided with a box containing a Submachine Gun and a Makoto MZ 250.

The mission has two parts: The first is to locate and steal the armored car from Bukit Dengkang. The vehicle is located in one of several domed garage bays helpfully situated near the fence. Feel free to complete the base if you're already here anyway. Grapple over (or blow up) the fence and sprint into the garage and take the driver's seat. The mission objective will immediately update to the next: Drive the armored car to the drop off point: a Gas Station at X:13876; Y:10980. ( If you're unfamilliar with the area, it would be a good idea to use your PDA and set a waypoint to the drop-off point.

Drive the car over or through your opposition. The fun thing about stealing an armored car is that it's going to be hard to stop you. Ignore the pursuers (or blow them up) unless you like the idea of running them over with your new toy. Head straight to the drop off. As soon as you enter the drop-off point, the pursuit automatically ends, no matter how many Panau Military cars or soldiers are right behind you.

Unrealistically, enough bullets can actually destroy the GV-104 Razorback. Taking too much damage results in the armored car exploding and the mission failing. As long as it's still in (mostly) one piece when you arrive at the drop-off point, the mission will be successful. Luckily, the armored car will take a lot of damage before this happens. It's advisable to blow up the enemy vehicles from a distance, rather than next to you, as the explosions also damage the car.

Also this is a rare version of the GV-104 Razorback because it has mounted Miniguns. 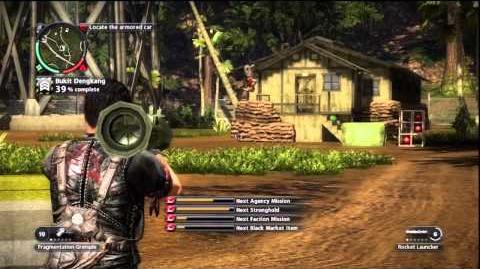 Retrieved from "https://justcause.fandom.com/wiki/Taming_the_Beast?oldid=156993"
Community content is available under CC-BY-SA unless otherwise noted.