watch 02:43
The Loop (Games)
Do you like this video?
Quality Level:

The Tendrilizer is a weapon in Just Cause 4. It is exclusive to those who purchased the Los Demonios DLC.

It's a special gun that seems to be entirely made of organic matter. There's a big ball in the middle of it that is shaped like a brain. This brain is constantly moving weirdly. It also brown balls at either end, which glow yellow in darkness.

When aimed at people/buildings/vehicles/paved roads: It has no effect. It just shoots out a yellow tracer round that may slow down and stop in the air.

When fired at any natural surface (it also works on roads). It makes a giant tendril pop out that holds a Warchief Assault Tank. The weapon can spawn up to 24 of these tendrils. The tanks are all "possessed" by the tendrils. The tendrils can be destroyed and they disappear when the game is reloaded. These tendrils attack everything in range, from civilians and animals to Army of Chaos rebels, Black Hand soldiers and even Rico, just like the tendrils seen in the infestation missions.

It should be hidden in the bushes on the roof of the "observation post" at Isla De Los Annilos. The spawn point becomes unlocked after completing Extermination. Leaving the area may cause it to despawn.

Many players report having searched all the ruins on the island and not having found it. It's unknown how to make it spawn, if it doesn't. It may take several island visits on different days to see it.

Alternatively, closing and opening the game should increase the chances of finding this weapon.

If it still isn't there, PC players can get the Entity Spawner mod and input the text: "Spawn seed". The gun should be the only thing that pops up on the hint bar section. 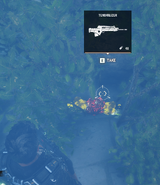 Held in a fog. The weapon is similarly bight in darkness, but becomes dark when in daylight.
Add a photo to this gallery 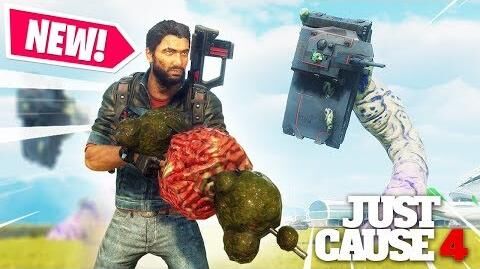 Retrieved from "https://justcause.fandom.com/wiki/Tendrilizer?oldid=165693"
Community content is available under CC-BY-SA unless otherwise noted.