Teo is a character in Just Cause 3.

Teo has a love for statistics and studies. He is also seen having a few squabbles with Rico. Even though he is a mercenary, he is shown happily working with them on an armored vehicle, simply because he loves the subject matter.

Teo is a mercenary hired by Dimah just before the mission Connect the Dots. He works with Annika Svennson as mentioned during Connect the Dots. He is also good at patching up people with gunshot wounds, suggesting he may have been a doctor, or at least was taught medical training at some point in his life.

In the mission Son of Medici, he at first promises to help Rico, but then leaves him alone to fight Di Ravello on his own.

Unlike Annika, Teo makes no appearance in the Bavarium Sea Heist DLC. This is somewhat surprising considering that in all of his appearances throughout Just Cause 3, he is always seen with Annika.

His weapon of choice appears to be a CS Wraith 225R, as he is seen using it in several missions.

Teo with Mario and Rico. 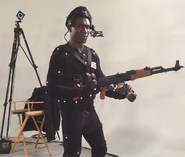 JC3 development - full-body motion-capture. Was he played by this guy? 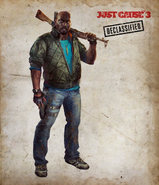 Early concept drawing.
Add a photo to this gallery
Retrieved from "https://justcause.fandom.com/wiki/Teo?oldid=161963"
Community content is available under CC-BY-SA unless otherwise noted.