The Little General is a golden revolver in Just Cause 3.

The Little General is a unique variant of the CS44 Peacebringer. This is Sebastiano Di Ravello's personal weapon.

The flash suppressor is an extremely uncommon feature for revolvers.

This weapon has a slight damage increase over the CS44 Peacebringer against infantry, but much greater increase against vehicles: most civilian vehicles (and some military ones) explode after, at most, four shots from the weapon. It shares ammunition with the Peacebringer and other handguns. Shots from this revolver appear to be more powerful as enemies that have been shot fly back as if they have been hit by a shotgun round.

This weapon becomes available at the end of the main story, but it is not accessible through Rebel drop. Why this is so is unknown. 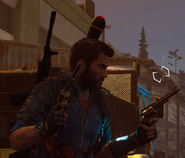 At the volcano, after Son of Medici.
Add a photo to this gallery

Start a Discussion Discussions about The Little General