The White Tiger is the third Agency mission in Just Cause 2. For the organization "White tiger", see: White tiger.

From as early back as Casino Bust, Karl Blaine tells Rico that Tom Sheldon may have "went up jungle, started some kind of rebel gang." After Rico completes the first three stronghold takeover missions, the three faction leaders will occasionally tell Rico about "information" that Rico gave as part of a deal to work for them. They all have differing lines, but the words "White Tiger" come up in all of them. After causing enough chaos, Sloth Demon will notify Rico with "I have been informed that you have been on the lookout for the White Tiger. It has come to my attention that recently, a lowlife and gambler by the name of Ken Pang has been in his employ. If you wish to find Ken Pang, I suggest speaking to the informant at Lengkok Sungai. He will tell you where to find him... for a price."

Cross the river and go to the Lengkok Sungai Gambler's Den. Upon arriving there, you have to kill all of the guards, then steal a radio from a dead guard.

The cutscene shows the guards bringing out Ken Pang to be executed. You will be in the tower above the courtyard. It will be advised to use an accurate weapon, like the Sniper Rifle, to kill the guards and save him. However, you can still use any weapon to kill the executioner.

There is no need to switch your two-handed weapon for the sniper rifle, as the mission will progress as normal no matter how you kill the guards and save him. Even if you do, just take your original weapon and continue on.

Next, you'll have to run through the facility and kill everyone who gets in your way. This may be difficult at first, as Ken Pang will run past you and get killed if you're too slow. Once you have left the Lengkok Sungai Gambler's Den, there is a brief cutscene where Ken thanks Rico for saving him. Ken then tells you to get on one of the three Makoto MZ 250s and follow him throughout the desert. Soon, you'll get to an ambush point. Get off of your vehicle and kill all hostiles at the ambush point. Once all enemies are eliminated, get on the next conveniently located motorcycle and accompany Ken on a journey across the desert.

Soon you'll get to the broken cargo ship. Ken will leave and never be seen or heard of again. Kill all the soldiers if you want, but it is only the unnamed colonel that needs to be eliminated. If you still have a sniper rifle from the Gambler's Den, you can kill the colonel easily with a headshot. You'll find a data card with the whereabouts of the man known as the "White Tiger". After the battle and the cutscene, a UH-10 Chippewa will show up for use to hijack. Alternatively, you can use the Makoto MZ 250 located next to where Rico spawns after killing the colonel and use it to ride to the beacon. However, using the Makoto MZ 250 would take a lot longer to reach the next destination. Your next task will be to fly or drive to the Rajang Temple.

There will be a cutscene where someone shoots Rico with a poisonous dart. In the cutscene, Rico Rodriguez will be hanging upside down and is greeted by Tom Sheldon. Tom cuts Rico down and proceeds to have a brief conversation in front of a cooking pig about how he caught a pig-like how he caught Rico. He then reveals how he was the Sloth Demon all along, to which Rico acknowledges it was an anagram and criticizes Tom and his word games.

As it turns out, Tom was:

In the middle of their reconciliation, the Panau Military suddenly arrives at the Rajang Temple with their guns blazing. Rico picks up a minigun asking if he can borrow it, to which Tom Sheldon replies that it might come in handy as he holds an unloaded Assault Rifle. Once the cutscene ends, Rico will now be holding a minigun and Tom now has a shotgun, and while it is very useful in eliminating all the soldiers to protect Tom, the use of the minigun is actually optional. Stay with or ahead of Tom and mow down all the soldiers. You can shoot enemies right through the columns (the columns will respawn after the mission, should you ever return to this location). Be very careful if Tom gets in the way, as he can easily die to friendly fire if the Minigun is used.

After you kill all the enemies, there will be a cutscene where Tom wonders how his White Tiger cover was busted. Rico speculates it may be Jade Tan while Tom suspects it was Karl Blaine. Tom's theory is confirmed when Tom checks Rico's PDA. He discovers a 'bug' that tracked Rico's location, that Karl Blaine apparently put on there when he offered Rico to upload some intel into his PDA. Blaine likely leaked this to the government, after being tortured by Baby Panay himself. Tom will advise Rico to continue causing Chaos, to find out who the 'unknown players' are, as they are surely working with the three factions. Tom will then leave in a military truck.

PC   In the ending cutscene, it is possible for Rico's minigun to appear floating mid-air during the cutscene. After the cutscene, however, it disappears.

PC   The UH-10 Chippewa arriving at the broken cargo ship might spontaneously kill all its occupants. The chopper will just fall out of the sky with its side gunner and pilot dead.

Rico and Ken Pang traveling to the broken cargo ship.

Rico telling Ken Pang: I'm not here for your benefit, you worm. I'm looking for the White Tiger.

Rico seeing Tom Sheldon for the first time in Panau since San Esperito.

Rico punching Sheldon for knocking him out with the dart.

Rico almost strangles Sheldon all the while saying So now we got that squared. You know how close I came to killing you?

Sheldon with his shotgun.

Sheldon leaving with his White Tiger "hirelings" in what appears to be a unmarked Fengding EC14FD2.

How Rico would've looked like when he picked up the minigun.

The minigun Tom Sheldon had in his possession before Rico took it. Note this is NOT how it was placed in the cut-scene (facing forward) instead of now, but it's impossible to recreate that exact position. 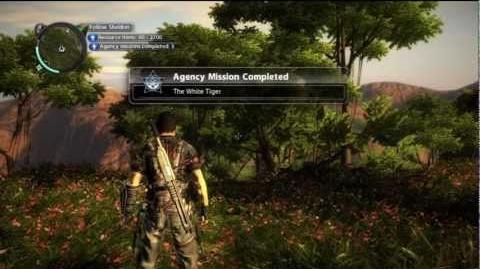