The Three Kings Hotel is a notable building in Just Cause 2.

The hotel consists of three main buildings, which are almost completely identical to each other. The buildings are in a triangle formation, surrounding a central courtyard with a Pandak Baby Panay Statue in the center. The architecture resembles the Ryugyong hotel in North Korea, in the sense that they're both relatively tall and triangular. This hotel is one of the largest tourist attractions in Panau.

There panorama elevators on the outside of the towers. You can grapple on to them and use them as a fast way up.

There's also a 3-way roundabout outside the hotel with a 40 m high monument in the middle.

This tower is the second highest of the towers - 371 m. There's a small scene here, the usual bar, Medicine cabinets, and small planted bushes, and a stage. The highest point is located on a mast. The tower is the most northern of the buildings.

This tower is unable to be entered.

This tower is the lowest of the towers - 350 m. It's lacking a mast and a stage and instead has a large wooden platform. This one is the most western of the buildings.

The tower is mostly the same as the others. It's not able to be entered.

In the Senjakala Islands region of Panau. It is still quite a distance from the Kem Jalan Merpati airport due east of it. It can be seen from much of the south eastern region of the Lautan Lama Desert. Several faction items are located here, with 2 Drug Drops on and near the hotel, and at least 1 Black Box nearby. The hotel can be seen from the Kem Gunung Gurun supply depot (Reapers stronghold).

The hotel was established after Baby Panay took power. The idea was to attract rich tourists, who have been given more rights than the Panauan citizens. To do this, he arranged the construction of the Panau Falls Casino, Mile High Club, Ski Resort and the Three Kings Hotel.

The interior of the "Japanese" tower. The TV screen is manufactured by the Tube company.

One of the elevators at the hotel. 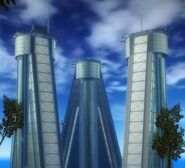 As seen from a distance.

Another picture of the interior inside the "Japanese" tower.
Add a photo to this gallery