This article is a list of all known vehicles in Just Cause 4.

Just Cause 4 has been released so all vehicles are now known. This article will eventually be moved to Category:Just Cause 4 Vehicles.

Many are listed in supply drop.

One of the new vehicular features in Just Cause 4 is aerodynamics. Developers explained in some promotional interviews that different vehicles with different aerodynamical properties will be able to withstand wind and tornadoes more than others.

Surprisingly, Just Cause 4 has a more realistic system for the effects of damage on vehicles (obviously setting aside the unrealistic equalization system). In previous games, when a vehicle was damaged, it would first look a little banged up, then more banged up, and then start leaving a trail of smoke, and then catch on fire before finally exploding. In Just Cause 4, vehicle performance is reduced and lowered when they get damaged. For example, when a player-operated Warchief Assault Tank is hit by an anti-tank weapon, the armor will be charred black and armor plates will fall off. The second hit will make it's appearance look even more damaged, such as the metal being burnt, as well as holes, cracks and dents on the armor. Besides making it look even more banged up and start leaving a trail of dark smoke, the third hit will also damage the tank's engine, resulting in engine failure. The tank's top speed will be significantly lowered, and there will be a few other effects as well. This is indicated by a flashing orange exclamation mark near the speedometer. The fourth hit will critically damage the tank. Visual effects include the tank looking even more damaged and deformed than ever, and flames all over the tank. Shortly afterwards, the tank will explode on it's own, even if it didn't take any more damage. The critical damage state is indicated by a flashing red exclamation mark.

From before the game was released, a note worthy of significant notice is the fact that all vehicle mounted weapons were revealed to have limited ammunition. Approximate examples from gameplay videos:

Another thing to note is that all vehicles have a radio. The radio has multiple music stations and a talk station Solís Hoy that expands the lore and reports news.

Previous Just Causes had a few vehicles that seemed to return, but they had different names and only resembled enough to count as spiritual successors. Examples: Pocumtuck Nomad, Mosca 125 Performance/Mosca 125 Rallye, the various MV types.

There can be no doubt that several vehicle models were reused from JC3 with only minimal changes, but they do not have the same names.

An important thing to note about vehicles and explosive weapons in Just Cause 4 is their system of equalization. Unlike previous games, in Just Cause 4, the damage and durability points/"health"/HP (The number system that JC4 uses to calculate durability is unknown) of vehicles and their weapons are somewhat equalized.

All unarmored vehicles can survive more or less the exact same amount of damage before being destroyed, which is to say they have the same "HP". Armored vehicles- whether lightly armored APCs, slightly armored helicopters or heavily armored tanks all are about just as durable: able to survive two explosions before the third blows them up, or eventually blow up from a long continuous period of machine gun fire. Although there are small differences in vehicles' durability/HP (such as a Warchief Assault Tank (heavy tank) being just a little more durable than a Pointman Scout Tank (light tank) which is slightly more armored than a Reptile AAV or Bloodhound Siege Heli), these differences are too subtle to notice without really trying. In reality, APCs and armored Attack Helicopters most likely cannot survive one cannon round, while tanks can survive multiple. Obviously, a main battle tank is more armored than a medium tank, which is more armored than a light tank, which is in turn more armored than an APC. However, JC4 makes them all have the same "health" units.

For one reason or another, Just Cause 4 decides to make all armored vehicles have about the same durability levels, which can be considered very unrealistic. On top of that, a Longbow Canon Truck deals only a little more damage than a standard canon round or RPG, despite the Longbow having a massive artillery gun: All explosions are equalized as well. However, different types of bullets fired from different handheld guns have different damage output, probably because the player relies more on handheld small-arms.

In Just Cause 3, the durability of vehicles and their weapons' damage are noticeably more realistic. In JC3, a tank is more durable than an APC or Attack Chopper, but still not enough to be similar to real life.

It is possible to remove this system by making the HP of certain vehicle types and the damage of certain weapon types realistic and different. This can be done through modifying game files. Since it only changes the value of certain variables (HP and damage factor), this shouldn't be too hard.

Notes about the below lists

The reason for this is: "Several Black Market DLC vehicles are missing from the list."

All motorcycles and similar things

A vehicle similar to the Stria Kavala being sucked up by a tornado.

Stria Toro-like car being sucked up by a tornado.

Cars in a parking lot being devastated by a tornado.

Motorbike that resembles an MV402.

Close up of the civilian dirt bike.

The motorbike that looks similar to the Geschwind V3000.

A Coyle Mambo being lifted by the new balloon tethers.

Vagabundo Buggy with a racing kit.

The vehicle resembling a Stria Cucciola.

Hatchback with a racing kit. 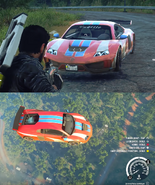 El Abismo inhabited bridge with cars and a bus on it. 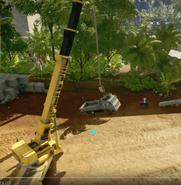 The "Hurricane/storm chaser". Easy to see why it resembles a firetruck.

Stormchaser in some mission cut-scene.

A tractor in some fields.

Airport tug and luggage train.
Add a photo to this gallery 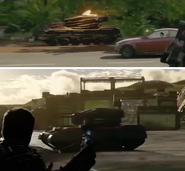 2 views of the Falconer AA Tank.

From the "story trailer". Alpinista Snowmobile and train, as seen during the mission Sandstinger: Train Robbery.

Trailer with a Guard Tower and a Cavalry Armored Truck.

Army of Chaos version of the Cavalry Armored Truck.

Some military boat and a fan boat.

Boat with a small lightning antenna.

Side of the Cobra inspired attack helicopter. This turned out to be the Firebrand Scout Chopper.

Cobra-like helicopter being flipped by what could be the new tether thrusters. This screenshot showcases Booster Mods.

Attack helicopter similar to the CS Navajo. This turned out to be the Spectre Attack Heli.

Two types of attack helicopters. These turned out to be the Firebrand Scout Chopper and Spectre Attack Heli.

Black Hand drone that is launched from a hand-held device. This turned out to be a Titan using the drone as Secondary Fire from his RG-PBA 9 Railgun.

Swept wing fighter aircraft similar to the F-14 Tomcat crashing into a glass dome. This turned out to be the Thunderhead Bomber Jet.

Same plane with its wings in the wider positions. This turned out to be the Fellhawk Jet Fighter.

Cargo jet resembling the U41 Ptakojester, being sucked into a tornado. This turned out to be the SkyCastle Cargo Jet.

Seaplane, which interestingly shares it's registration with every Urga U17 Akrobat form Just Cause 3. This turned out to be the Emsavion Cropduster.

Attack helicopter that appears to be a cross between an Mi-24 and Ka-52/50. This turned out to be the Bloodhound Siege Heli.

Plane similar to the Urga U17 Akrobat being sucked into a tornado. This is also the Emsavion Cropduster.

Helicopter that transports Gabriela Morales in some trailer. This turned out to be the Dropzone Chopper.

Another shot of the same helicopter.

Underside of the helicopter.

Three attack helicopters attacking a settlement. These three are all Firebrand Scout Choppers.

Close up of the AH-1 styled helicopter. Note its triple minigun setup.

Airliner after being blown up. This turned out to be the EM-979 Airliner.

EM-979 Airliner and a tornado.

Helicopter similar to the Eubus Eagle. This turned out to be the Emsavion Utility Heli.

Another shot of the Eubus Eagle alike helicopter.

First shot seen of the 'microjet'. This turned out to be the PA Microfighter.

The microjet pulling away revealing its wings.

Another shot of the drones.

Close up of the 'microjet' from the front.

The 'microjet' with it's wings folded.

EM-909 Private Jet one of the earliest spotted aircraft in promotional materials.

Helicopter in front of a train. This turned out to be the Spectre Attack Heli.

Two cargo jets at a large airport. This turned out to be the SkyCastle Cargo Jet.

Helicopter resembling the Urga Racek. This turned out to be the Emsavion Float Heli.

Plane similar to the Urga U17 Akrobat. This turned out to be the Emsavion Cropduster.

Weaponized zeppelin (light tank with balloons). This turned out to be the Prizefighter Tank along with Airlifter mods being showcased.

Black Hand helicopters deploying soldiers. This turned out to be the Bloodhound Siege Heli.

Stealth Microfighter from the "deep dive" trailer. See Downloadable content for Just Cause 4 for how to get one.
Add a photo to this gallery 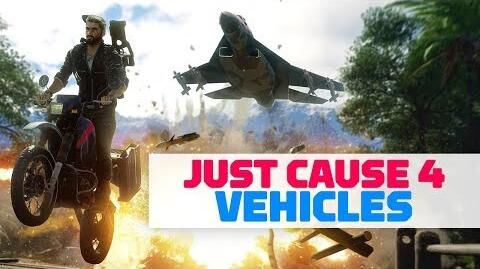 Retrieved from "https://justcause.fandom.com/wiki/Vehicles_in_Just_Cause_4?oldid=170085"
Community content is available under CC-BY-SA unless otherwise noted.