Just Cause Wiki
Register
Don't have an account?
Sign In
Advertisement
in: Articles with quality level 5, Planes, Just Cause Vehicles,
and 5 more

View source
watch 02:46
The Quarry - The Loop
Do you like this video?
Play Sound
Quality Level:

The Whiptail Gyrocopter is a small aircraft in Just Cause (1).

It's a small, one-seat helicopter, with no weapons or armor. Despite these short comings, it is relatively fast and nimble. This, together with its small size, makes it ideal for navigating cities and towns.

It should be noted that this vehicle's design is that of an autogyro. However, autogyros do not provide power to the top propeller; they require a rear propeller for forward motion, and their top propeller requires forward motion to provide lift. Without the rear propeller, this design is at best a rotor kite, which is not capable of independent flight at all. Alternatively, if the top propeller were powered, and its shape were capable of sustaining flight it would still be a helicopter without a rear rotor, and would begin to spin in the opposite direction of the rotors until they both reached an equal amount of torque.

View of the pilot cabin.

View of the propeller engine.

Flown by Otto. He looks like he's wearing sunglasses here.

In the mission Guadalicano Choo Choo.

Alexander AX-14, the biggest aircraft in the game, and above it is the Whiptail Gyrocopter, the smallest aircraft.

The Agency vehicles available through Heavy drop: A Bald Eagle Persuader on the left, a Whiptail Gyrocopter in the middle, and a GP Thunder Extreme Prototype on the right.

Agency variant, called in from a heavy drop at Esperito City - North.

At the Octava Military Camp, just north-west of the Guerilla 30 "Campo Barranco" safehouse.

Next to an Agency Jackson JC - 2 Alamo. 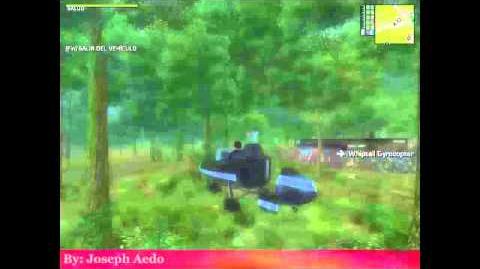