The wingsuit is a mode of transport in Just Cause 3, Just Cause 4 and Just Cause: Mobile.

The wingsuit is a set of small wings attached to Rico's clothing to allow the player to glide through the air while Skydiving. During skydives, the player already glides forward, but the wingsuit enhances this and allows completely horizontal movement. Powered wingsuit versions (DLC only) can even allow upward flight.

In JC3, the wingsuit is provided to Rico by Dimah during the mission Time For An Upgrade. Later, the Sky Fortress DLC adds weapons and an engine to it. This improved version is called "Bavarium Wingsuit".

The standard wingsuit is back in JC4. There is also an upgraded "Sky Striker Wingsuit" (previously known as "Black Hand Prototype Weaponized Wingsuit" in early promotional materials) as a preorder bonus (later added as a DLC that can be purchased by anyone). This version has a small rocket engine and can launch missiles.

In JC4 the wingsuit has been redesigned a little, to make the wings extends further along Ricos side. They're still only as wide as his arms, but the end of a wing is now near his knee.

The JC4 wingsuit (and parachute) can both have optional different looks. Some of these were provided as pre-order rewards, some have been announced as downloadable content for Just Cause 4, but most of them can be unlocked by completing various in-game tasks.

Wingsuits are available in JC:M for at least a few (maybe more or all) Firebrand members (the player). Little is known, but the player should be able to activate the wingsuit and glide in the air, via some sort of button on the mobile device.

The wingsuit allows a player to move fast in the air, opposed to the slow and stable parachute. It is easy to switch between Grappler, wingsuit and parachute, so staying in the air for a long time is even easier now.

As originally revealed by the JC3 design principal, Francesco Antolini, cars are faster than a wingsuit.

Stopping while wingsuiting can only be done with Gear Mods. The two other options are to either crash into something and ragdoll, or switch to Parachute.

The wingsuit is also demonstrated to those without the game in the Just Cause 3: WingSuit Experience.

As tested by some players by setting a map marker and calculating the speed, the maximum speeds in JC3 are:

The Sky Fortress DLC improves the wingsuit and Rico's ability to use it. The normal wingsuit gets replaced with a "Bavarium Wingsuit" which replaces the orange stripes with blue ones. Similarly to optional Gear Mods, it's possible to switch back to the usual wingsuit. The "Bavarium Wingsuit" has the following features:

The standard wingsuit has more or less the same performance as in JC3. Compared to its predecessor, the wingsuit in Just Cause 4 seems to be able to glide for a longer period of time without losing altitude. Also, as of Just Cause 4 it seems easier to reach a higher speed when gliding than it was in Just Cause 3. Diving and grappling whilst in the wingsuit will quickly accelerate it to over the average speed of a civilian-operated car.

The "Sky Striker" (originally known as the "Black Hand Prototype Weaponized Wingsuit") is a standalone pre-order bonus/DLC that upgrades the wingsuit. The Sky Striker has a booster engine, similar to the one in JC3 and a rocket launcher that fires 4 rockets in the general direction of the reticle on the screen. This version was later added to every gold edition of the game. Doing wingsuit challenges makes upgrades the booster in the sense that it can be used continuously for a larger period of time before needing to recharge. The same stunts also increase the number of available missiles fired in immediate succession from 4 to 12. The booster and missiles both "recharge", so really there's no limit either way.

Unlike the JC3 version, the wingsuit is no longer possible to take off from water, indicating that in-universe, the version developed by Dimah is superior to the Black Hand version, in the ability to adapt to environments at least. Water take-offs in JC4 can be achieved with the Hoverboard, which comes with the Danger Rising DLC. In addition to that, no longer can Rico kick himself away from things that he's about to crash into. However, he is capable of performing an impossibly effective airbrake mid-air, which makes him lose all momentum almost instantly and fold away his wingsuit, dropping into a falling state.

Another view of the "flame wingsuit" near eDEN Station: The Angel.

One of the earliest promotional pictures for the game. 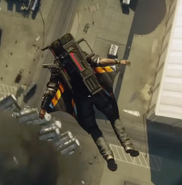 One of the optional unlockable wingsuit skins. Pictured above Aburrida. 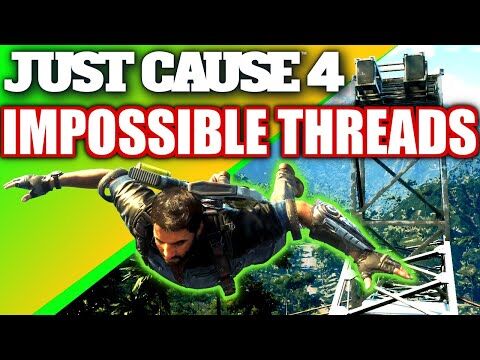