Zeno Antithikara is a character and secondary antagonist in Just Cause 3.

According to himself in The Watcher on The Wall, he was always an unpopular and ugly person.

He's a scientist in the field of Bavarium weapons development. His colleague Dimah describes him as having an adequate IQ. According to himself in The Watcher on The Wall, he wanted to develop Bavarium for civilian uses, but Di Ravello wanted weapons.

In the mission Turncoat, he reveals he was part of "Di Ravello's Bavarium Corps" and that he wants to defect. He agreed to defect, because Dimah had "made very specific offers of wealth and land". He was angry at her for tricking him, because he received no reward. He also expresses disappointment at Rico and Mario being the only people The Rebellion send to protect him. They subsequently deliver him to a rebel farm anyway.

In the mission Rico and the Rose, it is revealed that Zeno has again changed sides (or that he was always a double-agent) and was spying for General Di Ravello and is promptly arrested. Later Di Ravello sends the Black Hand to free him. He attempts to escape in a helicopter during The Watcher on The Wall but is killed by Rico.

Zeno is arrested in Rico and the Rose. 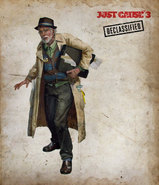 Concept drawing.
Add a photo to this gallery
Retrieved from "https://justcause.fandom.com/wiki/Zeno_Antithikara?oldid=158813"
Community content is available under CC-BY-SA unless otherwise noted.